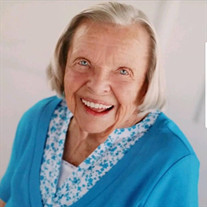 October 11, 1917 - September 21, 2018 Nadine Driggs, 100, peacefully passed away in her sleep early morning Friday, September 21, 2018, at Moses Lake in her independent living apartment. Nadine was born October 11, 1917, in Goble, Oregon, to Raymond Glenwood Grimshaw and Golda Bell Thomas Grimshaw. She was the eldest of 9 children of whom 7 proceeded her in death: Wallace Leroy, Troy Raymond, Vertis Junior, Enid Artina, John Hugh, Laurel Glenwood, and Mona Wava. Her youngest sibling,Vern Ellis, resides at Hacienda Heights, California. Nadine married Delbert Driggs on July 7, 1936, at Vancouver, Washington. He proceeded her in death in 2011 at Moses Lake. Together they had five children, three whom also proceeded her: Bonnie Jean, Ramona Leah and Janice Lee. Samuel Raymond with his wife LaRee Hull Driggs resides at Austin, Texas, and CherylKay Driggs Elkins resides at Moses Lake. Nadine's direct descendants totaled 59. She had five children; twelve grandchildren; four step-grandchildren; twenty-eight great-grandchildren, and fourteen great-great-grandchildren. Nadine spent her early years in Goble, Oregon. She met Del when she traveled by bus to visit family who had recently moved from Goble to Finley, Washington. They were soon married and lived there for a very short time then to Goble and from there to Mason City (now Coulee Dam), Washington and back to Finley. In 1942 they moved to Moses Lake, the place they called “home” for 76 years. There were several exceptions that took her away from Moses Lake for short periods of time, but she always had a longing to return. These places included: Portland, Or; Yakima, Washington; Palmdale, California; Seattle, Washington; Clear, Alaska; Santa Barbara, California; Kwajalein Atoll in the Marshall Islands; Saigon, Vietnam; and Thailand. Her husband, Del, could not have had a better loving wife. She cared for him for 75 years. Nadine followed him to various places of employment. She herself was often employed handling payrolls and other clerical functions. In the early 50’s, she and a friend had for a short period of time opened and managed a baby and child's clothing store in downtown Moses Lake called the Judeen Shop. She was an excellent mother and grandmother always caring for family. Her cooked meals were second to none and she loved to have immediate family, relatives and friends at her dinner table. She took great delight in serving others. She was still preparing her own meals right up to the time of her passing. Nadine always had a smile on her face. She loved to play games and she was very good at them. She enjoyed emailing, doing research on her computer, doing jigsaw puzzles and reading novels among other activities.She was an avid Seattle Mariners baseball fan and rarely missed watching their games on television. The Mariners honored her during a game on her 100th birthday. A Memorial Service is scheduled for 11:00 am, Saturday, October 27th at the Moses Lake Presbyterian Church, 1142 W Ivy Ave. Family and friends are invited. Sign online guestbook at www.kayserschapel.com

The family of Leah Nadine Driggs created this Life Tributes page to make it easy to share your memories.