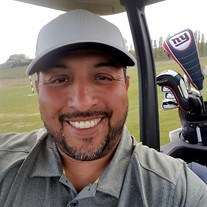 Lawrence “Larry” Michael Vasquez, 50, passed away peacefully on January 24, 2019 at home surrounded by his family and friends after a long, hard fought battle with cancer. Larry was a lifelong resident of Moses Lake and was born on July 21, 1968 in Moses Lake, WA to his loving parents Juan and Josie Barrientoz. He graduated from Moses Lake High School in 1986. Larry married Barbara Nelson in July of 1998. They welcomed their Princess, Hannah Jean, in July of 1999 and their Champ, Kaeden Michael, in February of 2002. Larry loved being their father and coached his kid’s baseball team for many years. He will always be their biggest fan. Larry had a great love for sports, especially baseball. He was involved in coaching kids locally for many years. He enjoyed playing sports throughout his life including playing softball with his brothers. He was an avid sports fan especially when it came to the New York Giants and the Mariners. His other passions were golfing and playing poker. Larry enjoyed life and loved spending time with his family and friends. Larry met Margie Milbrandt in October of 2016. He loved spending time with her and playing golf together. He was blessed to have her in his life and she never left his side through the hard times. She was truly his Angel. Larry had an infectious smile and could light up a room with it. He wore that smile throughout his fight. He would make friends everywhere he went and once you were his friend, you were family. He was very appreciative of those friends that were by his side the last 18 months. He is survived by his parents Juan and Josie Barrientoz, his girlfriend Margie Milbrandt, his children Hannah and Kaeden and step-daughter Jaimee (Jaime) Castro, his brothers Dion Vasquez, Johnny (Rachel) Barrientoz, Thomas (Alyce) Barrientoz, and Fabian (Mariana) Barrientoz, his sisters Juanita, Terri and Ann, and close cousins Sandy Greer, Artie Vasquez, Jeff Vasquez, Kino Diaz and Yomeida Treviño, along with many nieces and nephews, cousins and Aunts and Uncles. He is preceded in death by his Grandmother Aurelia Vasquez and his close friend Travis Scothern. The family would like to give a special thank you to Dr. Luther Thompson and his kind and caring staff and to Assured Hospice for all their support. A Rosary and Mass will begin at 9:30am on Wednesday, January 30, 2019 at Our Lady of Fatima Catholic Church.

Lawrence &#8220;Larry&#8221; Michael Vasquez, 50, passed away peacefully on January 24, 2019 at home surrounded by his family and friends after a long, hard fought battle with cancer. Larry was a lifelong resident of Moses Lake and was born... View Obituary & Service Information

The family of Lawrence "Larry" Vasquez created this Life Tributes page to make it easy to share your memories.