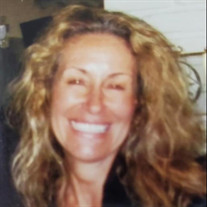 LAVONNE “KAY” CARRELL, 64, sadly passed away Sunday, January 30 2022 in Moses Lake, Washington. She was fortunate enough be in the arms of her favorite cousin Suzie Tokunaga hugging and kissing on her as she took her last breath. Kay was born and lived in Yakima and Selah, Wa. After years in the Yakima area, she with her family moved to Seattle/Vashon Island where she resided for many years. Vashon Island was one of her favorite places to be. She spent the past three years in Moses Lake, Wa. to be close to her siblings and extended family members. After graduating from Selah High School she attended Yakima Valley Community College. Kay worked in the Dental profession for some time, but her passion was being a flight attendant for Alaska Airlines since 1987. Kay had a unique hobby of dumpster diving and a fetish for spray painting anything she could get her hands on and dabbled in a bit of canvas art. She was fortunate enough to travel to Europe and other places, but Europe was her favorite place. Besides, the love of her children, the one thing she loved dearly was her many PUG DOG’s that she raised during her life, Ollie, Prince Rupert, Mufasa to name a few. Kay had two beautiful children Ronald “Kyle” Rodman and Sloane Madison Dwinell. Tragically she dealt with the biggest loss a parent could ever endure. Ronald “Kyle” Rodman at age 21, lost his life and Sloane Madison Dwinell at the age of 15 also went to be with the angels. Kay is now at peace forever, safely home in heaven with her precious children. She is also preceded in death by her mother Cee Cee Carrell and Stepfather Ronald Carrell and her father Joseph Geiss. She is survived by her sisters, Jolene Geiss, Tana Geiss (Chuck) and Balinda Karras (Mike), her brothers Martin Carrell and Dennis Geiss (Lori). Also, survived by numerous nieces and nephews, Beth and Cole Kirkpatrick, Justin Walker, Tayler and Carter Marshall, Sara Aranda, Zachery Carrell, Ian Lounds, Jason Thompson, Jaylynn Geiss and Logan Geiss. She was lucky to also have numerous Great Nieces and Nephews. She is also survived by a very special person all her life, Uncle Elmo Costello. The Memorial will be on February 26th, 2022, at Kayser Funeral Home 831 S. pioneer way, Moses Lake, Wa.

LAVONNE &#8220;KAY&#8221; CARRELL, 64, sadly passed away Sunday, January 30 2022 in Moses Lake, Washington. She was fortunate enough be in the arms of her favorite cousin Suzie Tokunaga hugging and kissing on her as she took her last breath.... View Obituary & Service Information

The family of Lavonne Kay Carrell created this Life Tributes page to make it easy to share your memories.