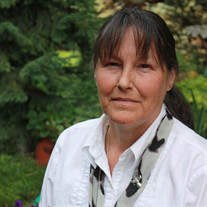 Lauren Sue Grammer (née Craft) died at home on Thursday, January 3, 2019 after a lengthy battle with cancer. Her husband and sons were by her side. Please sign the online guestbook or leave a note for the family at www.kayserschapel.com Arrangements are in care of Kayser's Chapel & Crematory. She was born on May 28, 1958 in Spokane, WA to Stanley and Leslie Craft. Her step-father, Fred, married her mother after her father passed. She had six siblings: Meredith, Allyson, Lyle, Russell, Bethel and Dale. She was preceded in death by Meredith as well as her father in 1973 and her mother in 2013. As a child, Lauren lived in Spokane, Honolulu and Moses Lake before her family settled in Ephrata where she attended Grade School, Junior High and High School, graduating in 1976. After high school, she joined the Army, but was honorably discharged when she became pregnant. She married her high school boyfriend and they had a son, Jakeob, in 1977. She moved back to Spokane in late 1977 and worked as an accountant while attending college. She divorced in 1979 and met her future husband, Greg, that same year. They dated long-distance until Mt. Saint Helens erupted in 1980. After that, she lived with Greg for the rest of her life. They married in 1982 and Greg adopted Jake in 1983. She had her second child, Christopher, in 1984, who brought three grandchildren into her life: Alaura, Kiera and Caitlin. While in Moses Lake, she worked for Employment Security for two years and Columbia Basin Job Corps for 11 years. She then moved on to the Grant County Assessor's Office in 1993 where she worked as a Senior Clerk. In 2000, she worked with Ron Sell in the GIS section of the Assessor's office, implementing a distributed information system across county departments. She worked with various departments including the commissioners, sheriff, auditor, prosecutor, county clerk, planning department and the juvenile court, assisting with their various needs. She ran for the position of County Assessor in 2003 and won, succeeding her mentor, Don McDowell. She served for three terms through December of 2014. During her time as Assessor, she was seen as a true team player and very much enjoyed meeting with and helping the public, always putting their needs first. She was also very active in the Republican Party. Lauren loved to explore new vistas. She was an avid backpacker, camper, boater and fisherwoman, happiest in the great outdoors. A late honeymoon in Hawaii introduced her to snorkeling which soon led to her and Greg becoming advanced SCUBA divers. They enjoyed diving in many lakes in Grant County as well as the Puget Sound, but she particularly loved diving in Hawaii, specifically Maui, Lanai and Molokai. Aside from her personal and professional accomplishments, she loved animals. She adopted many dogs and cats over the years and gave them all a loving home. She loved her husband and was most proud of her two sons and adored her grandchildren. She also loved all of her family dearly. We all love her and miss her very much. To all who knew her and appreciated her, she wanted us to request that, in lieu of flowers or cards, please send a donation in her name to the Grant County Animal Shelter at grantcountyanimaloutreach.com

Lauren Sue Grammer (née Craft) died at home on Thursday, January 3, 2019 after a lengthy battle with cancer. Her husband and sons were by her side. Please sign the online guestbook or leave a note for the family at www.kayserschapel.com... View Obituary & Service Information

The family of Lauren Grammer created this Life Tributes page to make it easy to share your memories.