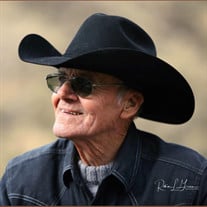 Larry F Sather On April 21, 2020 this cowboy took his final ride to that big open range in the sky after a hard fought battle with Glioblastoma cancer. Though our hearts are broken, we find our peace in knowing there is no more pain and suffering. Born... View Obituary & Service Information

The family of Larry F Sather created this Life Tributes page to make it easy to share your memories.