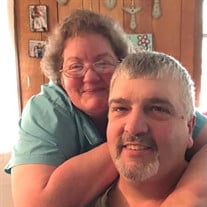 Larna Larsen Pierce was born on Nov 29, 1965 to Marijean Moore and Marvin Larsen In Clarkston, Wa. She had a 3 brothers and 2 Sisters, Mark Larsen, Jon Larsen, Russell Larsen, Jana Naab, and Mardee Coleman. Larna grew up in Moses Lake, Wa graduating from Moses Lake High School in 1984. She Married her High School sweetheart Gary Lee Pierce Jr on June 16, 1984 in Othello, Wa. She lived in Othello Wa until 2007 when they moved to Moses Lake, WA. She had her first son Brent Lee Pierce Oct 25, 1984. Then she had her second son Kenneth John Pierce Mar 30 1989. Then she had her third son Jay Burton Pierce July 30 1996. She then went to college graduating Big Bend Community College with an Associate Degree in Business Management in 2003. Larna strived to be the best wife, best mother, best Christian she could be. She helped the community the best she could, and was always there for her kids, and for her husband and friends and her mom. She loved her grand kids Elias Alexader Pierce, Mercy Grace Pierce, Avery Dawn Pierce so much and always loved to spoil them and tried her best to always spend time with them. She leaves behind a loving husband Gary Lee Pierce Jr, a loving mom Marijean Moore, her brother Russell Larsen and sisters Jana Naab and Mardee Coleman, sons Brent Lee Pierce, wife Audra, Jay Pierce, wife Brianne, Kenny Pierce, wife Whitney. Grandkids Elias Alexander Pierce, Mercy Grace Pierce, and Avery Dawn Pierce. Larna Pierce always believed in heaven and that she would go there one day. Gary Pierce said when she went to heaven in his arms she was at peace and had peace in her eyes. So we can all know with comfort and relief that Larna is no longer in pain and no longer hurting she is with our Heavenly Father.

The family of Larna Pierce created this Life Tributes page to make it easy to share your memories.