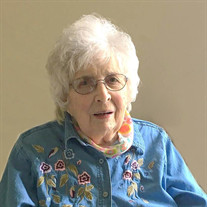 Lahoma E. Pittman, 99, of Othello and former longtime resident of Warden was welcomed into Heaven on December 30, 2017. She was residing at Coventry House. Viewing will be from noon to 5 p.m., Thursday, January 4th at Kayser's Chapel of Memories. Graveside services will be held at 10 a.m., Friday, January 5, 2018 at Sunset Memorial Gardens in Warden. A celebration of her life will follow at 2 p.m. at the Moses Lake Presbyterian Church, 1142 W. Ivy Street. Please sign the online guestbook or leave a note for the family at www.kayserschapel.com Arrangements are in care of Kayser's Chapel & Crematory. Lahoma Elizabeth Cayton was born to Thomas Clark Cayton and Blanche Whetherholt Wall Cayton April 6, 1918, in Griggs, Oklahoma near the western tip of the Oklahoma Panhandle. She was the second of five children, born 10 years after the Panhandle, known as No Man’s Land, was combined with the Oklahoma Territory and Indian Territory to become the state of Oklahoma. Lahoma’s childhood was affected by the Great Depression from 1921 to 1941, but more so by the Dust Bowl from 1934 to 1940. She grew up in Cimmaron county, Oklahoma. The first chapter of the award-winning book,The Worst Hard Time calls Cimmaron county ground zero for the dust bowl. Through it all she was determined to get an education and rode her horse 5 miles to school in Plainview graduating high school in 1936. She continued her education at Panhandle A&M in Goodwell, 35 miles east of home. Where she received three degrees graduating in 1940. She also met her future husband Wamon Pittman while they both worked in the cafeteria. After she graduated they broke up. Wamon transferred to Oklahoma A&M(Oklahoma State) in Stillwater, graduating in 1941 with a degree in agronomy. Lahoma returned close to home teaching at Plainview. On December 7, 1941 the attack on Pearl Harbor occurred. As all the men went to war Lahoma stayed home and took on the job of high school girls basketball coach. A woman coaching was unheard of, as it was a man’s job. But as granny said, when the men went to war the women had to stay home and take care of everything else. Wamon joined the Marines after graduating, served a year stationed in the Samoan Islands as a Marine Corps Captain, before being listed as killed in action, leading the landing on Eniwetok Island. After surviving his injury, Wamon was transferred to San Diego. The summer of 1944 Lahoma told her parents she was going to California to visit her girlfriends, except she was going to marry Wamon on June 22,1944 in LaJolla, California. As Granny put it, they were meant to be together and nothing was going to keep them apart. After Wamon's discharge in December 1945 they returned to the Perryton/Pampa area of the Texas Panhandle to be close to home and relatives. During this time two sons Howard and Lynn were born. In 1949 Wamon moved the family to Seligman, Missouri, in the Ozarks near the Oklahoma Arkansas border to farm. Lahoma returned to teaching high school in the Wheaton School District. In 1956 the family was on the move again, to Balko in the Oklahoma panhandle to farm closer to family and friends. Lahoma taught 5th grade for the Balko School District. In the summer of 1962, the family took a vacation to the Northwest to see the Seattle World’s Fair. During that trip, Wamon fell in love with the Columbia Basin irrigated by Grand Coulee Dam, and eventually moved the family to the Warden area to farm in the summer of 1964. Lahoma continued her teaching career at Garden Heights Elementary School in Moses Lake, eventually transferring to Warden where she taught well into her 70's. Anyone that attended Warden Elementary during that time remembers Mrs. Pittman, with more people than can be counted saying she was their favorite teacher. After retiring Lahoma took up gardening, volunteering at the Warden senior center helping the old people, most who were younger than her, and judging home economics entries at all the local fairs. Typing this up reinforces how much Lahoma is dearly missed as she is the one who would do the final review of any typed paper. Abraham Lincoln said; "It's not the years in a life, it's the life in the years". Lahoma had both the years and the life experiences, covering nearly 100 years. Lahoma is survived by two sons, Howard (Wilma) Pittman of Warden. Lynn (Norma) Pittman of Moses Lake. Grand children, Stefanie (Mike) Lowry of Moses Lake, Megan (Chris) Jevne of Yakima, Emmet (Nicki) Pittman of Kernersville, NC, Andrew Pittman of Ellensburg and Jonathan Pittman of Warden. Five great grandchildren, Trevin, Lyndsey, Brooklyn Lowry, Abby and Katie Jevne.

Lahoma E. Pittman, 99, of Othello and former longtime resident of Warden was welcomed into Heaven on December 30, 2017. She was residing at Coventry House. Viewing will be from noon to 5 p.m., Thursday, January 4th at Kayser's Chapel of... View Obituary & Service Information

The family of Lahoma E. Pittman created this Life Tributes page to make it easy to share your memories.