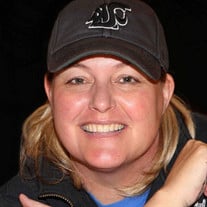 Kristene "Kris" Duncan-Crum (K-Dunk), 47, a resident of Moses Lake went home to be with the Lord, Saturday, April 15, 2017 at home, surrounded by family. Kris was born on October 5, 1969 in Spokane, Washington and was welcomed by her loving parents, Bruce and Diana Duncan. Kris attended schools in Moses Lake and graduated from Moses Lake High School in 1988 where she played volleyball, basketball and softball and was proud to be a Chief! Kris continued her education at Big Bend Community College where she played basketball for two years then continued on as an assistant coach for the Lady Vikings. Kris was the proud mother of Derek (20), Braxson (17) and Kendyl (16) Crum. She was her children’s biggest fan and you could always find her in the bleachers or stands, watching her kids do what they loved and always supporting them in their endeavors. Kris loved sports so much that if even if her own kids weren’t playing, you’d still find her at a game cheering on someone else’s and at the very least, she’d be watching a game on TV. As much of a sports lover Kris was, her other passion, and maybe polar opposite, was pageants. Kris was a beloved volunteer in the Miss Washington Scholarship Organization. She joined the Miss Moses Lake team in the mid 1990’s. She became the co-Executive Director in 2003 and assumed the role of Executive Director on her own a few years later. In addition to running a successful local pageant, Kris was a leader in the Miss Washington Local Pageants Association, serving as the president of the organization for the past 10 years. Kris was sincerely respected by volunteers at all levels of the MWSO. At the time of her death, Kris was employed by the Moses Lake School District as a para-educator for a select group of students. Kris loved her students and was very committed to their success both in and outside the classroom. Even when she had to take a leave of absence due to her illness, their well being was of utmost importance to her and she would always be available for a visit, conversation or just a text from any one of them. Kris is survived by her parents, Bruce & Diana Duncan, brother Nick, her sons Derek & Braxson and her daughter, Kendyl, all of Moses Lake. She was preceded in death by her brother Derek. We invite you to join us in celebrating Kris’s life this Saturday, April 22nd at 2:00pm in the Moses Lake High School gymnasium, 803 Sharon Ave. An account has been set up at Washington Trust Bank 402 S Ash St., Moses Lake under Diana Duncan/Kris Duncan-Crum Memorial Account. Please sign the online guestbook or leave a note for the family at www.kayserschapel.com Arrangements are in care of Kayser's Chapel & Crematory.

Kristene "Kris" Duncan-Crum (K-Dunk), 47, a resident of Moses Lake went home to be with the Lord, Saturday, April 15, 2017 at home, surrounded by family. Kris was born on October 5, 1969 in Spokane, Washington and was welcomed by her loving... View Obituary & Service Information

The family of Kristene "Kris" Duncan-Crum created this Life Tributes page to make it easy to share your memories.