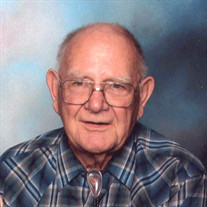 Kenyon DeVenyKrider Kenyon entered peacefully into his Eternal Home in Heaven and was reunited with wife on October 16, 2016. Kenyon was born on June 9, 1923 in Pullman, Washington. He was the son of Lanta Alfred Krider and Juanita (Goodenough) Krider. His early years were spent on the family wheat ranch between Hatton and Lind. During the Depression years the family moved to Northern Idaho where he was educated in a one room school house. The extended family farmed and existed on their knowledge and skills during that difficult time. It was during this time that he learned to make due, and improvise. During his high school years he attended Highline High School near Seattle, and then graduated from Coeur d’ Alene High School. Following his graduation, he joined the CCC’s in Northern Idaho for several years. He joined the Navy and received an education focused in Electronics. He started out with training at Texas A&M, and in a few months was transferred to Yale, and then Dartmouth where he was a Regiment Commander. Later in the early 1960’s, he joined the Coast Guard Reserves in Seattle during the Cuban Missile Crisis. He received an Honorable Discharge from both Branches of the Service. Following the service, he returned home to Northern Idaho where he attended North Idaho Junior College. It was there that he met his wife, Hazel Temple. They were married on August 16, 1949, at the First Presbyterian Church in Coeur d’Alene. In 1951, they welcomed daughter, Susan into the family. Shortly thereafter they moved to Boise, Idaho. It was in Boise that Kenyon applied his skills in electronics. Along with serving as a Patrol Officer on the Boise Police Department, he maintained and repaired their communications equipment. He served on the Boise police force for 11 years. In the early 1960’s a move was made to Seattle. Following his time in the Coast Guard, he worked for a short time for Boeing. He then went to work for the Washington State Patrol where he once again maintained and installed communications equipment throughout Washington. In the mid-seventies he changed jobs, and worked in Signal Communications for the City of Renton coordinating traffic lights, installing communications for the police, and repairing radars. He eventually transferred to the City of Bellevue, and worked asa supervisor in their Signal Communications Division. Three weeks after retiring he opened his own business in Kent, Washington under the name of Wescom. In 2001 both he and Hazel moved to Moses Lake to be closer to their daughter. It was here that he started announcing at dog shows; this lead to travelling to all over Eastern Washington and Northern Idaho for announcing assignments. Many friends were made along the way. Kenyon enjoyed many hobbies throughout his life. Among these were flying airplanes; both real and RC model. He had a passion for reading, Classical and Opera music. He auditioned for the Metropolitan Opera when he was in his early twenties. Rock hounding, ham radio, storytelling, and catching an occasional Walleye or Salmon also brought great joy to his life. He had a solid belief in the teachings of his Lord and Savior, Jesus Christ. Kenyon is survived by his daughter Susan, and her husband, Larry Ellestad of Moses Lake, niece Sigrid Soini of Shoreline, her children and grandchildren,and the extended Ellestad family. He was preceded in death by his wife Hazel of nearly 66 years, two infant sons, and his sister, LanitaNarice Strom. A Memorial Service is scheduled for 11:00 AM, Saturday, November 5th, at Living Word Lutheran Church, 2609 West Broadway, Moses Lake, Washington,Pastor Lou Hesse officiating. Kenyon was buried at the Washington State Veterans Cemetery in Medical Lake, Washington.

Kenyon DeVenyKrider Kenyon entered peacefully into his Eternal Home in Heaven and was reunited with wife on October 16, 2016. Kenyon was born on June 9, 1923 in Pullman, Washington. He was the son of Lanta Alfred Krider and Juanita (Goodenough)... View Obituary & Service Information

The family of Kenyon Krider created this Life Tributes page to make it easy to share your memories.