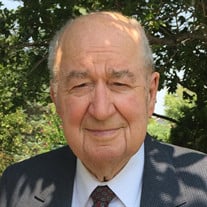 Keith was born December 19, 1925 in Salt Lake City, Utah to Lula and Orvil Ellis. Soon after his birth the family returned to Moreland, Idaho where he lived for the next 18 years. He graduated from Moreland High School in May 1944 and one week later was enlisted in the United States Army Air Force, stationed in Fort Douglas, Utah. He spent his military service as a tail gunner on B-17s and B-24s. Upon receiving an honorable discharge from the Air Force in 1946 he enrolled at the University of Idaho, and with the financial help provided by the GI Bill, he was able to graduate in 1950 with a B.S. Degree from the School of Agriculture. He was immediately employed by the Utah-Idaho Sugar Co. and started his career as a fieldman with this company in Belle Fourche, South Dakota. It was here that he met his future wife, Louise Edwards and they were married January 20, 1951. They were later sealed in the L.D.S. Idaho Falls Temple. His work with U-I Sugar required eight moves; always a new adventure, and eventually two sons and a daughter were making these moves with them. In 1968, and still with U-I Sugar, he was moved to Pasco, Washington with the assignment to diversify the Sugar Co. He acquired a 12,500-acre ranch along the Snake River and oversaw its development into an irrigated operation known as K2H. Then in 1971 he was able to oversee the purchase and the start of the development of 100,000 acres acquired from the Pryor Land & Coffin ranches located in the Horse Heaven Hills south of the Tri Cities, changing them from a dry land cattle and sheep operation into a highly automated irrigation operation. Keith was then a Senior Vice President in charge of Northwest Operations and after 30 years working for this company he retired, but not for long. A few weeks into retirement he was asked by Governor-Elect John Spellman to join his Cabinet and become the Director of Agriculture for the State of Washington. This was a great experience and he traveled internationally promoting WA Agricultural products. He was with the state for four years and in 1986 moved to Moses Lake where he has resided. He also served as a Commissioner on the Grant Co. Water Conservancy Board for a number of years. Education was always a high priority and he graduated from the Advance Management Program at Harvard Business School and from the American Management School in New York City. Keith was an active member of the Church of Jesus Christ of Latter-Day Saints and served faithfully in many callings including High Council, Bishop and many years working in the Seattle and Columbia River Temples. His son, Michael, mother and father and two brothers preceded him in death. He is survived by his wife, Louise, daughter, Jennifer Ricks – her children Justin, Dallas, Trisha and Ashley and two great grandchildren, Ava and Logan Hunter, and son, Mark (Jodi) Ellis of Bothell, WA and their two children Anthony and Lindsey. He is also survived by one sister, Margaret Jeppesen, sisters-in-law Elaine (Ross) Woodward, Joan (Dave) Forsyth, Sharlene (Dell) Nebeker and many nieces and nephews. The Ellis family would like to thank Assured Hospice, for their wonderful and compassionate service. Funeral Services will be Monday, July 15 at 11:00 a.m. at the Church of Jesus Christ of Latter-Day Saints, Rose Street Building, with viewing from 10:30 to 11. Please express your thoughts and memories for the family at www.kayserschapel.com. Arrangements are under the care of Kayser’s Chapel of Memories.

Keith was born December 19, 1925 in Salt Lake City, Utah to Lula and Orvil Ellis. Soon after his birth the family returned to Moreland, Idaho where he lived for the next 18 years. He graduated from Moreland High School in May 1944 and one week... View Obituary & Service Information

The family of Keith Ellis created this Life Tributes page to make it easy to share your memories.