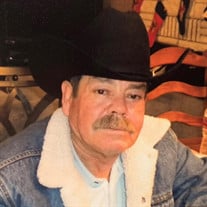 April 14, 1947- January 9, 2022 Justino “El Gatillero” Hernandez, longtime Moses Lake resident and patriarch of one of the largest farm-labor families of Eastern Washington, was peacefully serenated home through the lyrics of his favorite song, “Que Me Entierren Con La Banda”, whilst surrounded by the unconditional love of all his family. Our father fought with integrity, courage, and humility up until his last breath. Justino migrated to “El Norte” from Michoacan Mexico in 1979 to provide for his growing family who still lived in Mexico. Several years later, he was reunited with his wife and children in Kettleman City, California. Eventually, He and his family made their way to Washington State where he chose Moses Lake as a permanent home for his family. Justino believed that progress was not possible without hard work and so he and his family spent many years working the fields and orchards of Washington State, Montana, and Wyoming. These were some of the best years of his life as Justino took pride in teaching his children about the value of hard work and spending time with family. Justino was innately adventurous and outgoing making friends wherever he went. He often traveled back to Mexico to visit his many siblings, extended family, and friends. They loved him dearly and will feel his absence as well. Together he and his wife of thirty-eight years, Imelda Hernandez, raised nine children: Martina Chichowicz (Brian) of Spokane, WA, Gricelda Oliva (Andres) of Moses Lake, WA, Araceli Hernandez (Rey) of Ephrata, WA, Ismael Hernandez (Mirabel) of Othello, WA, Justino Jr. of Los Angeles, CA, Azucena Halmsteiner (Sunny) of Moses Lake, WA, Carlos Hernandez (Claudia), Tijuana, MX, Darlene Chavez (Sergio), Connell, WA, Angela Hernandez (Javier) of Wenatchee, WA. Justino is also survived by 27 grandchildren, 11 great-grandchildren who live within Central and Eastern Washington. He will also be dearly missed by his loving siblings, nieces, nephews, extended family, and friends who all reside within the United States and Mexico. Justino will leave a legacy for the love of music, dancing, parties, spending time with family, traveling, exploring, love of nature and backyard bar-b-ques of carne asada and chiles asados. Our father loved to laugh, tell stories of his adventures and life, he could sit and talk for hours. Anyone who had the honor of meeting our father could agree. He will forever be missed by all whose lives he touched. A man with a personality larger than life with the most contagious laugh ever. We will all miss you “Deri”, until we meet again. “Aqui se acabo el corrido del Gatillero” – Justino Hernandez

April 14, 1947- January 9, 2022 Justino &#8220;El Gatillero&#8221; Hernandez, longtime Moses Lake resident and patriarch of one of the largest farm-labor families of Eastern Washington, was peacefully serenated home through the lyrics of his... View Obituary & Service Information

The family of Justino Hernandez created this Life Tributes page to make it easy to share your memories.