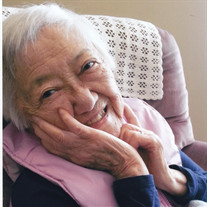 June Fusako Yamamoto of Moses Lake, WA passed away peacefully surrounded by her family on July 12, 2019 at Samaritan Hospital in Moses Lake. June was born on January 14, 1929 to Denzaburo and Ryu Kitamura in Toppenish, WA. She was the 6th born of 10 children. Her fondest childhood memories were the fun and laughter she shared with her siblings. Her family farmed in Toppenish until the start of WWII. Then her family was evacuated to Heart Mountain Detention Center in Wyoming. Later, June graduated from Palo Alto High school. Where she worked as “school kids” now known as Nannies with her sister and best friends Flo and Helen. She later graduated from sewing school. These skills she learned at a young age served her well as a homemaker and mother. On December 22, 1949 June married Hiro Yamamoto in Ontario, Oregon. After residing in Moses Lake and Othello they established their family farm in 1964 on East Royal Slope. She moved to Moses Lake after Hiro’s death in 1996 and most recently resided at Avamere at Moses Lake Assisted Living. June was a devoted wife, mother and sister. Her strength held her family together thru good times and tough times. She enjoyed fishing, cooking, sewing and gardening. In her younger years she was an avid painter, golfer and bowler. And was always game for a casino trip with family and friends. June is survived by her sons: Byron (Carol), Fall City, WA, Tim, Soap Lake, WA, daughter Becky (Gordy) Hattori, Redmond, WA, sister Kiyo, Monrovia, CA, and many nieces and nephews. She was preceded in death by her husband Hiro, son Gary, parents, and 8 brothers and sisters. Special thanks to the doctors and staffs at Samaritan Hospital, Confluence Health and Avamere at Moses Lake Assisted Living. Your dedication, care and support are appreciated. A memorial service will be held at Kayser’s Chapel of Memories, 831 S. Pioneer, Moses Lake, Wa. Tuesday July 30, 2019 at 2 pm. Casual attire.

June Fusako Yamamoto of Moses Lake, WA passed away peacefully surrounded by her family on July 12, 2019 at Samaritan Hospital in Moses Lake. June was born on January 14, 1929 to Denzaburo and Ryu Kitamura in Toppenish, WA. She was the 6th born... View Obituary & Service Information

The family of June Fusako Yamamoto created this Life Tributes page to make it easy to share your memories.