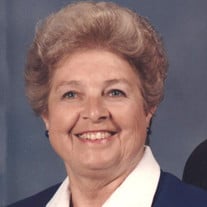 June Elizabeth Ottmar of Moses Lake, WA passed from this earth at her residence, Brookdale Hearthstone, on Tuesday, January 10, while surrounded by loved ones. She was 90 years of age. June was born on June 27, 1926 in Ridgefield, WA. She was adopted at the age of 12 by Samuel and Marguerite Roake, along with her biological sister, Dorothy Dana. June was raised in Castle Rock, WA where she graduated from high school and then married Herbert “Ray” Alsup. She and Ray had two daughters, Sharon (Alsup) Bernd, of Moses Lake, and Diane (Alsup) Dunford, of Worley, ID. The family relocated to Moses Lake in 1960. June stayed home with her daughters until they were both raised and married. In 1968 she married her husband of 45 years, Harvey R. Ottmar, who had three children of his own: Terry Ottmar, Kerry “Joe” Ottmar, and Tami (Begeman) Ottmar. She and Harvey operated a farm and trucking company in Moses Lake, where June primarily was the bookkeeper. She and Harvey made their home in Skyline Acres until moving to Brookdale in 2012. June enjoyed playing cards, putting puzzles together, gardening, cooking, spending time with family, and visiting their cabin on Lake Coeur d‘Alene. June was preceded in death by her four brothers and her husband. She is survived by her sister, Dorothy Dana and husband Rodger of Castle Rock, WA; daughter, Sharon Bernd and husband Bob of Moses Lake; daughter, Diane Dunford and husband Dane of Worley, ID; stepson, Terry Ottmar and fiance’ Dee Marshall of Moses Lake; stepson, Kerry “Joe” Ottmar and wife Michelle of Moses Lake; stepdaughter, Tami Begeman and husband Bill of Jerome, ID; 10 grandchildren and numerous great-grandchildren. A celebration of June’s life will be held at 11:00 AM on Tuesday, January 17, 2017 at the Moses Lake Presbyterian Church, 1142 W. Ivy Street. A private family interment will be in the Guardian Angels Cemetery prior to the service.

June Elizabeth Ottmar of Moses Lake, WA passed from this earth at her residence, Brookdale Hearthstone, on Tuesday, January 10, while surrounded by loved ones. She was 90 years of age. June was born on June 27, 1926 in Ridgefield, WA. She... View Obituary & Service Information

The family of June Ottmar created this Life Tributes page to make it easy to share your memories.