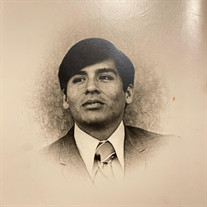 JULIO CESAR LUNA passed peacefully on May 13th, 2021 due to complications from Cancer. He was born November 19th, 1949 in Lima Peru to Pablo Luna and Rosa Ulffe de Luna. He was the 4th of 6 children. On February 22, 1958 Julio, had an accident where he lost 2 of his brothers and a sister. Julio had to have his leg amputated and he required a prosthetic leg for the rest of his life. He joined the Church of Jesus Christ of Latter-day Saints in 1963. He became close friends with a missionary and eventually, came to Moses Lake Washington to live with the missionary’s family. He attended Big Bend CC, BYU and eventually went on his own mission to California. When that mission was over, he flew back down to Lima. He met and married Alina Borja, civilly in Lima and then, they were sealed in the Washington DC temple. They raised 5 children, Crisdee LuDeen, Adam, Lani, Nalu and Maximo Eduardo. While in Lima he was a well-known teacher of English at the US Embassy, Ricardo Palma University, the Police Academy, La Catolica University and ICPNA. Everybody loved “Teacher Luna”. Julio had a passion for woodworking and he could make anything from scratch. He loved to teach and work with wood. Julio held many Church leadership positions and he worked hard with the youth of his Maranga Ward where he served in the bishopric for many years. He was a great strength to the growth of the Church in Lima. The family decided to immigrate to the United States in the year 2000. While in Moses Lake, he was a branch president, mission leader and enjoyed working with the youth as well. Julio was an inspiration to many people; he always had a smile on his face and a happy attitude. Up to retirement, he worked at Easy Home Furnishings as a salesperson where he was able to be know many people; he never lost an opportunity to talk about the gospel. He Loved the Lord first always and had a strong testimony of Him. Julio was diagnosed with Parkinson’s disease in 2015 and pancreatic Cancer in 2020. He never once complained he was always grateful for all of his trials and tribulations. Julio was preceded in death by his father and mother, his brothers Pablo, Ismael, Lorenzo and sister Marielena. He is survived by his sister Rosa (Lima, Peru), the love of his life, Alina, his daughter Crisdee (Raul), grandkids Keera and Kaeden, his son Adam (Heather) grandkids Alana, Diego, Leila and Dahlia, his daughter Lani (Gilmer) grandkids Christian, Anaya and Jace, daughter Nalu and his son Max (Anna) grandkids Leo, Nico, Sam and Mateo, and many friends and family that loved him so very much. His funeral will be at the Latter-Day Saints Church in Nelson Road, Saturday, May 22, viewing at 10:00 a.m., funeral at 11:00 a.m. It will also be broadcasted via Zoom for those who cannot attend.

JULIO CESAR LUNA passed peacefully on May 13th, 2021 due to complications from Cancer. He was born November 19th, 1949 in Lima Peru to Pablo Luna and Rosa Ulffe de Luna. He was the 4th of 6 children. On February 22, 1958 Julio, had an... View Obituary & Service Information

The family of Julio Cesar Luna created this Life Tributes page to make it easy to share your memories.

JULIO CESAR LUNA passed peacefully on May 13th, 2021 due to complications...