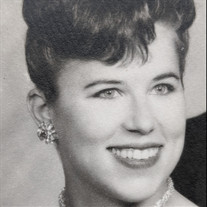 Judy Laverne Stillwell was born in Emmett, Idaho on May 28th, 1943 to Cleo Pullins and Velma Ford. Her mother, Velma, was later married to Lloyd Johnston. Together they raised Judy and her seven sisters in Moses Lake, Washington. Growing up, Judy and her sisters loved exploring outside, climbing trees, and getting into mischief. Their mother Velma was a no non-sense lady. Judy would always take the blame for their misadventures because she couldn’t handle seeing her sisters being punished. She was always true to her character. She was warm and inviting to others, with a dry sense of humor and a contagious laugh. She never failed to entertain with her passionate story-telling. She has shared countless memories that will be passed along to future generations. Judy met her husband Jim in Moses Lake. They married on October 11th, 1968 in Long Beach, California. During their earlier years of marriage, Jim’s military career allowed them to travel from Washington to California, New Jersey, Texas and Oklahoma. They had their daughter, Jeannie, in 1971 while stationed in New Jersey. In 1975, they welcomed their son, Jason, while stationed in Oklahoma. Jim and Judy made their way back to Moses Lake in 1987 to care for Judy’s mother. Judy worked primarily as an office manager throughout her professional career. Many of those years were spent working alongside her very close friends Judy and Philo Boyd. Judy also helped Jim run their personal business after he retired from the Air Force in 1975. They made a great team! She was very proud of her children and all of their accomplishments. Judy played a very active role in the lives of her grandchildren. She loved having them over for sleepovers, taking them camping and attending their sporting events and school programs. Judy was every bit of 4’9” with a larger-than-life personality. She enjoyed social activities such as thrift store shopping, playing cards and board games. She lived an active lifestyle, and even taught her grandchildren how to do cartwheels, backbends and headstands. She enjoyed taking her grandchildren camping at Lake Roosevelt where they hiked, fished, and explored. She loved helping the boys turn over rocks to find little creatures. Grandma was always up for to challenge her grandkids to an arm wrestling competition , right Dylan!? You could often times find Grandma Judy sitting with her legs crossed in the trampoline being bounced by her grandkids, or reading books together in their homemade fort. She was always up for any adventure they had in store for her. Grandma had a special way of making each of her grandchildren feel like her favorite! Judy is survived by her husband Jim, their two children Jeannie and Jason (Jen), along with their grandchildren Bradley (Melissa), Jordan (Cody), Andrew, Dylan, Kendra, Gavin and Colson. She also leaves behind her sisters LaVonne (Richard), Lorraine, Gayle (Joe), Kathie (Rick), MaryKay, and Ruby. Judy is proceeded in death by her mother Velma, father Cleo, Dad Lloyd, Sister Linda, and granddaughter Elizabeth.

Judy Laverne Stillwell was born in Emmett, Idaho on May 28th, 1943 to Cleo Pullins and Velma Ford. Her mother, Velma, was later married to Lloyd Johnston. Together they raised Judy and her seven sisters in Moses Lake, Washington. Growing up,... View Obituary & Service Information

The family of Judy Laverne Stillwell created this Life Tributes page to make it easy to share your memories.

Judy Laverne Stillwell was born in Emmett, Idaho on May 28th,...