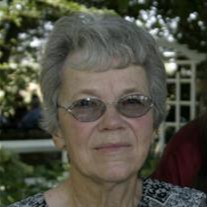 On June 12, with her loved ones surrounding her, Jesus gently gathered Jessie Juanita (Deweber) Mullin into His arms and carried her home, ending a fierce fight with heart failure. Juanita was born on April 14, 1932 in Pawnee City, Nebraska, the first daughter to Harry and Irene Deweber after six sons. The family moved to Pasco when she was a child, and she had many stories from growing up in her father’s vineyard. Upon her mother’s death in 1947, Juanita stepped into the role of tending the home for her father and siblings. Money was tight; she learned at an early age to be creative with what she had and to make a little go a long ways. After her high school studies, she worked as a proofreader for the Tri-City Herald. Although she did not graduate high school as a teenager, she proudly completed her GED as an adult. In the spring of 1952, Juanita met James Mullin and after a whirlwind courtship married him on December 26, 1952. They raised their family of four sons and one daughter in Pasco, Republic, Omak, and The Dalles, OR. Her family was very important to her and she loved caring for them. She joyfully filled her days with cooking, sewing, quilting, gardening and housekeeping until Parkinson’s Disease began to limit her abilities. She went camping with her family at Mount Rainier nearly every year when her kids were growing up, then as often as possible with grandkids after that. Staying active kept her happy, she loved to walk down country roads and enjoy God’s creation. She was very competitive and table games and word puzzles kept her mind sharp and entertained. She loved music and sang in school and church choirs, as well as playing the trombone in school band. Her faith was of utmost importance to her, and she was an active member of the Nazarene Church from the time she was a girl. She was a tireless prayer warrior and for her there was no greater joy than to know that her descendants had a vibrant faith. She stayed in touch with her large family by organizing and attending family reunions and get-togethers, and sending and receiving letters, birthday cards, and emails. Upon her husband’s retirement, they moved to Moses Lake where she contentedly lived the last 16 years of her life. She is survived by her husband of 65 years, Jim; her children Terry (Debbie), Carleen (Tim) Tucker, Jim (Trisha), David (Andrea), and Jerry (Angela); 21 grandchildren; 31 great-grandchildren; her sisters, Barb (Dave) Mong, and Shirley (Dan) Swan; and a large extended family. She was preceded in death by her parents, 8 brothers, and 2 grandsons. A memorial service to celebrate her life will be held at Moses Lake First Church of the Nazarene, 422 S. Balsam on July 14 at 11:00 AM. Please sign the online guestbook at www.kayserschapel.com Arrangements are in care of Kayser's Chapel & Crematory.

On June 12, with her loved ones surrounding her, Jesus gently gathered Jessie Juanita (Deweber) Mullin into His arms and carried her home, ending a fierce fight with heart failure. Juanita was born on April 14, 1932 in Pawnee City, Nebraska,... View Obituary & Service Information

The family of Juanita Mullin created this Life Tributes page to make it easy to share your memories.

On June 12, with her loved ones surrounding her, Jesus gently...