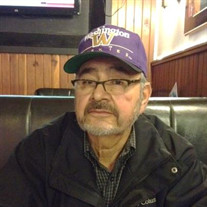 Juan “John” M Gamboa went home to be with our lord on Monday October 24th, 2016. He passed at home due to a long battle with cancer surrounded by his immediate family. In his battle of cancer, John said “the thing that has changed for me the most in the battle I am in is that I understand things a lot better, and I see life differently than before. I know the Lord is my strength, my family is my inspiration, and with that solid foundation of hope, I made that determination to simply take one day at a time.” John was born in Edinburg Texas to Gumicindo and Paula Gamboa. John was the eighth child of twelve siblings. He was a hard worker migrating from state to state with his family working the crops. The family settled in Sunnyside, Washington where he graduated in 1958. After graduation John joined the army, serving four years; two years active duty and two years of reserve. John then attended Moler Barber School in Yakima Washington, where he received his license. He moved to Moses Lake in 1964 where he joined his brother in the barbering business. Eventually his brother had retired from the business and John took over where he then barbered for fifty-two years. John’s most incredible and rewarding accomplishments of his life are his marriage and his two children. In 1966 he met his wife to be Victoria Alamos. They were married in 1967 and celebrated their 49th anniversary this year, had two children Eric (Julia) Gamboa, and Marlo Gamboa. They are proud grandparents of four grandchildren Kirstin, Erica, Zachary, and Alicia. And four great-grandchildren Jadynn, Anthony, Kingsley, and Dezmond. John’s passion was cutting hair, and he enjoyed visiting with each one of his customers that sat in his barber chair. He would always say that the customer who sits in his chair deserved his full attention. John enjoyed walking, golfing, and dancing with his lovely wife. He also enjoyed watching the Husky football games with his loving family. John was a very good person with an extremely big heart. He saw the good in others, and was loyal to those he knew. John was preceded in death by his parents, two brothers, and four sisters. The family would like to take this time to thank everyone for all of their continued love, support, prayers and to all of the wonderful stories and memories shared. Holy Rosary will be prayed at 10:30 a.m., Monday, October 31, 2016 at Our Lady of Fatima Catholic Church, 200 N. Dale Road followed by Mass of Christian Burial at 11:00 a.m. Please sign the online guestbook or leave a note for the family at www.kayserschapel.com Arrangements are in care of Kayser's Chapel & Crematory.

Juan &#8220;John&#8221; M Gamboa went home to be with our lord on Monday October 24th, 2016. He passed at home due to a long battle with cancer surrounded by his immediate family. In his battle of cancer, John said &#8220;the thing that has... View Obituary & Service Information

The family of Juan "John" Gamboa created this Life Tributes page to make it easy to share your memories.

Juan “John” M Gamboa went home to be with our lord on Monday...