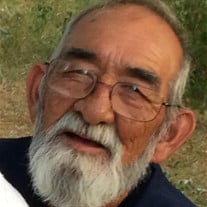 Juan M. Barrientoz (Johnny), a long time Moses Lake resident, passed away on Friday June 4, 2021. Johnny was born April 18, 1948 in Raymondville Texas, to Basilio Barrientoz and Joaquina Gracia. Johnny had 5 Sisters and 3 Brothers, Tomas, Ismael, Eloisa, Victoria, Robert, Rosie, Lydia, and Sally. His family moved to California in 1960. While in California, Johnny had three daughters Juanita, Terry and Ann. Johnny met and married Josie Vasquez on July 12, 1971. Together they raised 5 boys Larry, Dion, Johnny Jr., Thomas and Fabian. He loved watching his boys play football, baseball, wrestling and softball. And enjoyed coaching the boys and their teammates from the sidelines for many years. He was an avid Mariners fan and loved the Seahawks. Johnny was the best Papa to all of his grandchildren and loved them all very much. Johnny was a truck driver for most of his life and was currently working for Cascade Agronomics-Basin Farming. Johnny enjoyed his job and had many friends that he enjoyed working with. He was so excited when they put “Gramps” on the door of his truck. Johnny was preceded in death by his parents Basilio and Joaquina, his brother Tomas, his sister Eloisa, and his son Larry Vasquez. He is survived by his Wife Josie, Daughters Juanita (Juan) Rodriguez, Terry, and Ann. His sons Dion, Johnny Jr, Thomas (Alyce) and Fabian (Mariana). His sisters Victoria, Rosie, Lydia, and Sally. His brothers Ismael and Robert. He is also survived by 29 Grandchildren, 64 Great-Grandchildren, numerous nieces, nephews and friends.

The family of Juan M Barrientoz created this Life Tributes page to make it easy to share your memories.