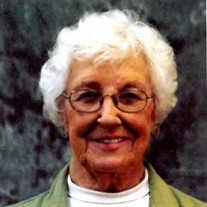 Joyce Hottell November 11, 1934 - March 2, 2022 Joyce (Barnett) Hottell went to her final home with the Lord to join her beloved husband on March 2, 2022 at the age of 87. Joyce was born November 11, 1934 to Alfred and Ellen (Perkins) Barnett in Colchester, England. In 1949, Joyce finished school and began her career as a secretary at the age of 15. At the age of 17 she met her future husband Jim Hottell, an American serviceman from Okanogan, WA., at a London dance hall. They married at St. Mary Magdalene Church of England on December 6, 1952. In 1955, they left England for Jim's next assignment to Moses Lake at Larson Air force Base. They lived there until 1959 when the next transfer took them to Watford, England. Joyce went back to work as a secretary until the birth of their daughter, Jennifer, in 1960. In January 1961 they were assigned back to Moses Lake. When her husband decided to retire in 1966, after 20 years of service, they made Moses Lake their permanent home. Joyce had such happy memories of being a military wife. In 1966, Joyce returned to the workforce as a cook for the Moses Lake School District serving meals at Longview Elementary School. In 1977 she applied for the high school counseling secretary opening and much to her surprise she was chosen for the position. After 30 years with the school district Joyce retired in 1996. In her younger adult years she enjoyed get-together's with family and friends, camping, fishing and traveling. After retiring Joyce took many trips to Europe to visit family and friends, cruises on the Pacific Ocean and road trips to the southern states. Joyce was an active member of Immanuel Lutheran Church and enjoyed the many activities with her church family, especially bell choir. Joyce is survived by her daughter Jennifer (Randy) Pugh, grand-daughter Kylee Bishop (Miguel) and great-grandson Aiden, sister-in-laws Elsie (from Canada) and Pat (from England), and many nieces and nephews. She was preceded in death by her loving husband, Jim, in 1986, her parents, six brothers and 2 very special "sister" friends Peggy Longston and Janet Watson. A very special thank you to the Monroe House Assisted Living for the wonderful care and attention they provided and Columbia Basin Hospital in Ephrata for the care given during Joyce's final days. A celebration of Joyce's life will be held on March 25, 2022 at 12:00 pm at the Immanuel Lutheran Church on 1020 S. A Street with a luncheon to follow in the fellowship hall.

The family of Joyce Hottell created this Life Tributes page to make it easy to share your memories.