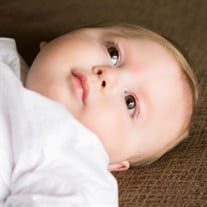 Joshua Daniel O’Hara (aka The Fatness), 22 months old, while bravely fighting Ohtahara Syndrome left this world to be with the angels on February 25, 2018 while in his mother’s arms. Joshua is son of Jeremiah and Shalon (Gough) O’Hara. Joshua was at home, in “his spot”, on the couch with warm blankets, lots of love, and affection. Joshua is best known for his amazingly long and thick eyelashes. They were the talk of the room and the first thing everyone noticed. Joshua has a smile that was true and full of love, you could feel the happiness and joy on his face! He had a grunt and a sigh that were his very own way of communication. You could always tell when he was relieved, happy or frustrated. His cheeks were so chubby and soft, they welcomed cuddles and kisses! He would melt into your arms every time you held him, making him the very best snuggler ever. Joshua is the youngest of 3 loving boys. His older brothers David (6) and Noah (4) miss him dearly and stood as his sidekick during his battle with Ohtahara Syndrome. Joshua was diagnosed with Ohtahara Syndrome on June 20th, 2016 at Sacred Heart Hospital in Spokane, Washington. He fought fiercely with neurological, gastroenterology, and pulmonary complications. Seattle Children’s Hospital was instrumental in maximizing his quality of life with some of the best doctors in the nation, and a palliative care team second to none. The Moses Lake, Assured Hospice Team, led by Jen Gardner, made us family and were here day and night to make sure Joshua was comfortable and had all the support he needed to thrive. Although Joshua was only 22 months old he changed so many lives. Because of his and hospice’s persistence now no child in the northwest will be turned away from end of life support. Joshua will have a scholarship through the Assured Hospice foundation to help other families in time of need. Joshua’s story will be part of national Hospice leadership training to ensure the highest levels of care for children. His story was used during the National Hospice and Palliative Care Organization gathering to inspire others to be brave and help terminal children in need of quality of life support, and for their families. A celebration of his life will be held at 1:00 p.m. on Saturday, March 10, 2018 at Moses Lake Alliance Church, 1100 N Grape Drive, Moses Lake, Washington 98837. Please wear bright colors and come to celebrate our sweet baby boy!!! Survivors include his parents, Shalon and Jeremiah O'Hara; brothers David and Noah; paternal grandparents, Debbie O'Hara and James O'Hara; maternal grandmother, Melissa Proffitt. He was preceded in death by his maternal grandfather, David Proffitt.

Joshua Daniel O&#8217;Hara (aka The Fatness), 22 months old, while bravely fighting Ohtahara Syndrome left this world to be with the angels on February 25, 2018 while in his mother&#8217;s arms. Joshua is son of Jeremiah and Shalon (Gough)... View Obituary & Service Information

The family of Joshua Daniel O'Hara created this Life Tributes page to make it easy to share your memories.