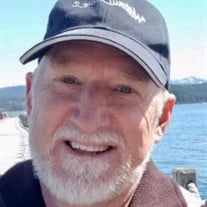 Joseph Paul Warnick of Moses Lake died March 11, 2022 surrounded by his loving family. Joe was born on August 23rd, 1963, the youngest of seven children to Hugh and Betty Warnick of Moses Lake. Joe graduated from MLS in 1982 then moved to Southern California to attend the University of San Diego. He graduated with a degree in Business Administration in 1986. He worked with a shipping company out of the Port of Los Angeles and later established a freight forwarding business. However, Joe yearned for other things and talked often of travel and a desire to experience other cultures. He wanted a lifestyle that welcomed creativity and imagination, with a devotion towards contributing healthy solutions to the many ills facing our world. He got out of his business and for the next 8 years traveled and worked his way around the world through Europe multiple times, to the Caribbean, Asia, the Persian Gulf and especially to the continent of Africa which he fell in love with and returned to many times. Joe met his wife, Samia Lannabi on his travels to Mali in Africa. She was a French teacher from Algeria and she taught in the American Embassy in Mali. They were married in 2002 and later moved to Florida where Joe decided to further his education in Agriculture which led to a Master's Degree in Horticulture. His goal was to work as an Agricultural Consultant which he did in Africa and other countries for a number of years. Joe is survived by his wife Samia of twenty years, and 2 beautiful children that he was so proud of, mother Betty, brother Roy and sister-in-law Judy of Moses Lake, brother Dale and sister-in-law Karen of Bellevue, brother David and sister-in-law Diane of Driggs, Idaho, sister Mitja and brother-in-law Tom Stansfield of Bellevue, sister Taelor of Moses Lake, sister Lorray of Moses Lake, foster sister Carmen Castellanos and husband Al Lewis, foster brother Raymond Castellanos of Florida and numerous Nieces and Nephews. Preceded in death by his father, Hugh R Warnick, brother-in-law Tom Shelby and Great Niece Emma Hamsher. Funeral service was held Monday, March 14t at Guarding Angels Cemetery of Moses Lake.

Joseph Paul Warnick of Moses Lake died March 11, 2022 surrounded by his loving family. Joe was born on August 23rd, 1963, the youngest of seven children to Hugh and Betty Warnick of Moses Lake. Joe graduated from MLS in 1982 then moved to Southern... View Obituary & Service Information

The family of Joseph Paul Warnick created this Life Tributes page to make it easy to share your memories.