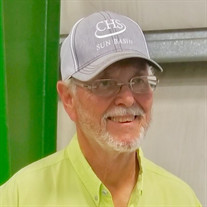 Our Dad,John Raymond Shipley, was born October 30, 1948 in Montrose, CO, to parents Theodore Ray Shipley and Dolores Rita Shipley. His family moved to Warden, WA, in the early 1950’s to begin their farming career in the Columbia Basin. He grew up with siblings Reta and David Shipley playing with neighbors and BB guns, stirring up a good time and sometimes a little trouble! Dad’s father passed away at a very young age. This made Dad, as the eldest sibling,a loving protector. His quick wit and tender heart helped to support his family through difficult times. Dad started work with Asgrow Seed Company in 1969, and so began his passion for farming as well as people. The company changed hands multiple times, but Dad never wavered and celebrated his retirement this past July with some reticence as he took pride in being “not your ordinary” field man. He wanted to be and was a champion for his growers. With remarkable care, compassion, and integrity, he conducted his business with each grower, good friend, and Bob’s Coffee Shop buddy. Dad worked to impart real knowledge to those he had the pleasure of training in his field, and those men, too, will have a piece of him in their hearts forever. His REAL heart shown through for all to see and those that knew him loved him. BUT… no one loved him as much as his Blondie. Dad met Mary Jones, and after she caught on to his quick wit and went on few rides in his hot rod Camaro,they married in November of 1970 and their adventure began! The two were a team and adventure they did! Travelling the world together, they made memories that will live on forever. The tables turned in early 1986 when they gave birth to Dad’s Princess, Jordan Shipley, and many peashooter fights and wit wars would ensue. A few short years later, Dad was lucky to deliver his miracle son, Brody Shipley, right in his pickup truck in the middle of the freeway. A common kind, gentle nature made them fast pals, and their mutual love of trucks, cars, and guns only grew over the years. Five years ago, he was blessed with his first grandchild Jayden Eve Shipley. They formulated a language of their very own; her charm and Dad’s quirk made for endless entertainment with her beloved Papa. Dad left us early January 23, 2019. He was home with his brave, hard-loving wife by his side. We will miss him, love him, and banter with him in heaven forever. John is preceded in death by his mother Dolores Shipley, father Theodore Shipley, grandmother Mary Medley, father-in- law Clarence Jones and mother -in -law Joyce Maslen. He is survived by his wife Mary Shipley, daughter Jordan Shipley, son Brody Shipley, Princess-in-the-Making granddaughter Jayden Shipley, brother David Shipley, sister- in -law Pamela Shipley, a sister Reta Shipley, brother-in-law Johnny Jones, sister-in-law Julie Jones and many loving nieces and nephews. A celebration of his life will be held at 2:00 p.m. on Tuesday, January 29, 2019 at the ATEC Building (1800 Building) at Big Bend Community College. Interment will be in Guarding Angels Cemetery. Please sign the online guestbook or share a memory with family at www.kayserschapel.com Arrangements are in care of Kayser's Chapel & Crematory. Directions to ATEC Building: If heading North on HWY 17 take Patton Blvd exit, turn left on Bolling St. to the 1800 Building. If heading South on HWY 17, turn left onto Randolph Road, turn left onto Patton Blvd, turn right onto Bolling St to 1800 Building.

Our Dad,John Raymond Shipley, was born October 30, 1948 in Montrose, CO, to parents Theodore Ray Shipley and Dolores Rita Shipley. His family moved to Warden, WA, in the early 1950&#8217;s to begin their farming career in the Columbia Basin.... View Obituary & Service Information

The family of John Shipley created this Life Tributes page to make it easy to share your memories.