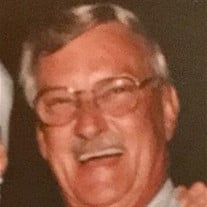 John Wayne McAfee, 75, of Moses Lake, Washington, succumbed to heart disease at Providence Sacred Heart Medical Center in Spokane, Washington surrounded by his family on September 7, 2019. John is survived by his wife Beverly (Kershner) McAfee, sons John W. McAfee, Jr., Michael S. McAfee, and adopted daughter Kari (DeGonda) Stafford, daughters-in-law Shana (Fansler) McAfee and Luisa (Urzí) McAfee, and loving grandchildren Kayla, Kolby, Marco and Sofia, nieces, nephews, extended family and friends from Drake Mobile Park at the Potholes State Park in Washington. John was a loving husband, father, grandfather, and friend to everyone. John loved fishing. He could be found almost everyday fishing for his limit of crappie, perch, trout, and walleye on the Potholes State Park lakes of central Washington. John worked in the auto industry for his entire life. He sold new cars, used cars, owned auto repair shops, and sold recreational vehicles. John was the consummate salesman; he could sell freezers to Esikimos. Everyone who met John said that he would give you the last dollar in his wallet or the shirt off his back. John believed "everyday is a holiday and every meal is a banquet!" A special thank you to the team of healthcare angels at Providence Sacred Heart Medical Center for their loving care and support during his final days. Also, the family would like to extend their sincerest gratitude towards Kayser's Chapel & Crematory for being very accommodating and understanding during this difficult time. A celebration of life ceremony will be held at Drake's Mobile Park at 12:00 p.m. on Wednesday, September 11, 2019 at 7788 Road F SE, Othello, Washington 99344. In lieu of flowers, memorial donations may be made to the Cast for Kids organization at https://castforkids.networkforgood.com/projects/80612-in-memoriam-of-john-w-mcafee

The family of John Wayne McAfee Sr. created this Life Tributes page to make it easy to share your memories.