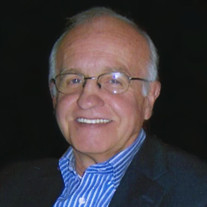 John Marshall Fickes of Moses Lake, Washington, passed away on April 29, 2021, in Spokane, surrounded by his loving family and wife of nearly 48 years. He was 75. The youngest of three, John was born April 22, 1946, in Omak, Washington, to Frank and Elsie Fickes. John attended Okanogan High School where he excelled in sports and music. He was Captain of the Senior Varsity Basketball team; competed on the high school football team; and played cornet in the honors band. President of his Senior Class, John graduated in 1964. John enlisted in the U.S. Army in 1967. He was a military dog handler in Korea, and was stationed in Gary, Indiana, and Chicago, guarding missile silos. One of his beloved dogs was named Dude. John exited the military in March 1970. He then attended Central Washington University and earned his teaching degree. While at CWU, John met the love of his life, Mary Sue Wilkins, of Renton, Washington. Mary Sue also was pursuing a teaching degree. Together, they graduated summer of 1973 and married on Aug. 18 of that same year. The two settled in Moses Lake. They raised a family and taught in Moses Lake schools. John taught fourth, fifth, and sixth grades at Lakeview Elementary for 28 years from 1973-2001. They became members of Immanuel Lutheran Church where their three children were confirmed. John had a passion for chess and started a chess club at Lakeview. John crocheted colorful bookworms and gifted them to his students—a skill he learned from Mary Sue’s grandmother. After retiring from teaching, John pursued something different: long-haul trucking. He proudly earned his CDL license from Big Bend Community College and signed on with Stevens Transport. After a stint, he realized his love of family meant more, so he returned home. John was a loving and generous father and husband. He supported his children in all their interests. He adored his grandchildren: Max, 9, Oliver, 7, Jocelyn, 6, and Braeden, 1. His greatest joys were family time, annual trips to Seaside, Oregon, family camping trips, fly fishing, and golfing. He enjoyed watching and attending sports games. Favorite musicians of his were John Denver and jazz pianist Dave Brubeck. John loved a good Western. He is survived by his wife, Mary Sue, of Moses Lake, and three grown children, Jennifer Edson and husband David, of Bellevue, Washington; Andrew and wife Helen, of Lakewood, Washington; and Jonathan and partner Zoe Miller, of Seattle. He also leaves behind his brother, Gerald Fickes, of Issaquah, Washington. He is preceded in death by his parents, Frank and Elsie; sister Joan Gustin and husband Larry; sister-in-law Kay Fickes; and nephew Don Gustin. A funeral service will be held at 1 PM on Thursday, May 13, at Kayser’s Chapel of Memories, preceded by a viewing from 11 AM-1 PM. The service will also be streamed live on Kayser’s Chapel of Memories Facebook page at https://www.facebook.com/Kaysers-Chapel-of-Memories-104201534614825 In lieu of flowers, donations may be made to the American Stroke Foundation at americanstroke.org/donate.

John Marshall Fickes of Moses Lake, Washington, passed away on April 29, 2021, in Spokane, surrounded by his loving family and wife of nearly 48 years. He was 75. The youngest of three, John was born April 22, 1946, in Omak, Washington, to... View Obituary & Service Information

The family of John Marshall Fickes created this Life Tributes page to make it easy to share your memories.

John Marshall Fickes of Moses Lake, Washington, passed away on...