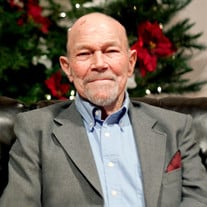 John Alvin Culver - March 8, 1934 – October 26, 2017 John went home to be with the Lord on October 26, 2017. He was born in Montrose, Colorado on March 8, 1934 to Cleo and Minnie Culver. He was the second oldest of ten siblings. After attending high school in Montrose, he entered the U.S. Navy in 1953 and served as a machinist mate on the U.S.S. Higbee. After being honorably discharged in 1957, he went to work as an ironworker around the Los Angeles area in California. John loved to dance, and one night he met the love of his life, Marlene, at the Palomino Club. They married in 1961 and together they raised one son, Kerry. They spent most of their 53 years of marriage following John's occupation as an Ironworker. He started off with Local #155 in Fresno, California where he established lifelong friends. In the early 1970’s they moved to Washington state and he worked out of Local #14 in Spokane, where he worked on many projects in the Pacific Northwest. After retiring in 1993, John and Marlene moved to Ennis, Montana, where they enjoyed hunting, fishing, prospecting, and socializing. In 2010 they moved to Moses Lake, Washington to be closer to Kerry and his family. John could often be found in the middle of a remodel project on any home he had and was always willing to lend others a hand. The project he was most proud of was the “Jolly Green Giant”; a bus they converted to a motorhome and traveled around to different job sites. John enjoyed being around kids and loved to tease and make them laugh. He was especially fond of his grandchildren and he enjoyed the hugs the great-grandchildren greeted “Papa John” with. In the years after Marlene’s passing, he was able to stay at home with the help of his grandson, Andy. John repeatedly expressed his gratitude for that love and companionship. He is survived by his son Kerry Culver and wife Patti, three grandchildren, Adrienne Hernandez and husband Macario, Andrew Culver, and Daniel Culver, two great-grandchildren Aiden Culver and Makenzy Culver, brother Richard and wife Glenda, sisters Patsy Stewart, Betty Richburg, Micky Cox, sister-in-law Ramona Johnson, and numerous nieces and nephews. He is preceded in death by his parents, wife, infant daughter, brothers Bob, Frank, Donald, Oliver, sister Emma Cooley, sister-in-law Gloria and husband Doug Deutscher, and brother-in-law Wayne Johnson. A Memorial service will be held on November 2, 2017, at 2:00 p.m. at The Assembly at Moses Lake Church. Please sign the online guestbook or leave a note for the family at www.kayserschapel.com Arrangements are in care of Kayser's Chapel & Crematory, Moses Lake.

The family of John A. Culver created this Life Tributes page to make it easy to share your memories.