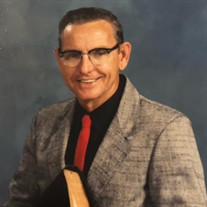 John Dee Becknell, 1930-2021 Reverend John Dee Becknell, affectionately referred to as “Pastor” passed away at the age of 91 to join his beloved maker and Lord, Jesus Christ. He is a direct descendant of William Becknell who created a profitable trade route in 1821, The Santa Fe Trail, now known as the Mountain Route in New Mexico. John was born in Stark City, Missouri and graduated from Midway High School. John was a star of the basketball team and was known to glance at his high school sweetheart and wink before sinking a basket. After graduation he married the love of his life, Bonnie Marie Woods on Valentine’s Day of 1949. He worked in the Sawmills in Washington and later decided to devote and commit his life to the service of God and helping people. He then was accepted into Seminary School in Portland, Oregon to study to become an ordained minister. After becoming a Pastor, his first assignment in 1957 was as a missionary in Laredo, Texas for the Fellowship of Prayer Church based in Washington. John was instrumental in building, serving, and sharing God’s hope and faith in Laredo, Texas, Nuevo Laredo and Allende, Mexico. He also supplemented his income working as a jeweler repairing watches and clocks, an insurance agent, and in addition to this worked for a Cable company. After twenty years with the Fellowship of Prayer, he accepted a position in California with the Nazarene church and later transferred to Quincy, Washington where he served until his retirement in 2005. While living in Washington, he was an avid gardener and grew fruits and vegetables which were canned and shared with his family and the community. In his lifetime he ministered the word of God to thousands of people and even while residing in Sun Terrace Senior Living Home he read the bible to many of the residents. He is survived by his loving family: wife and three daughters, Alice Lynette Doncaster, Deborah Jene Beauchamp, Cheryl Lea Becknell Patterson, eight grandchildren, and sixteen great-grandchildren. Alice and three of her grandchildren recently visited Daddy/Grandpa and he affectionately stated, “Did I start all this mess?” Even at 91 years of age, he still had a sense of humor! The legacy and family will continue to grow as the great-grandchildren will begin families of their own, but best of all they will always be part of the Becknell family. A memorial service will be held October 2nd at 3pm for John and Bonnie Becknell at Bethel church in Richland, Washington.

John Dee Becknell, 1930-2021 Reverend John Dee Becknell, affectionately referred to as &#8220;Pastor&#8221; passed away at the age of 91 to join his beloved maker and Lord, Jesus Christ. He is a direct descendant of William Becknell who created... View Obituary & Service Information

The family of John Dee Becknell created this Life Tributes page to make it easy to share your memories.