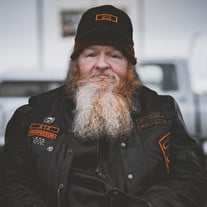 Longtime Moses Lake resident John “Professor” Clifton Anderson passed away peacefully on March 8th, 2018 at his home in Pasco, Wa in the company of his loving wife of 40 years and family after battling several medical conditions for years. Born in Idaho Falls, Id. on July 28th, 1955 he was the 2nd of 6 children of parents N. Joyce (Corbridge) Anderson and Larry Anderson. He graduated from Boise High in 1973 and served in the United States Air Force from 1973-1977 before settling in Boise to raise his family and master the skill of carpentry. In 1986 John moved to Moses Lake where he coached little league, was active in Boy Scouts, and used his carpentry skills to leave his mark throughout the Moses Lake area. He graduated from Central Washington University in 1996 with a Bachelor in Arts and a Teaching Certificate. He went on to work at Big Bend Community College for almost 20 years teaching English and working in the Library and English lab, sharing his love for literature and history to many. As an active motorcycle enthusiast he was a member of The Unchained Brotherhood MC where he continued to give back to the community. He is preceded in death by his parents Larry and Joyce Anderson. He is survived by his loving wife Beth Lynn (Langlands) Anderson, son Jason Anderson on Poulsbo, son John Anderson of Lake Stevens, daughter Cherish Anderson and Cory Foster of Ephrata, son and daughter in law Jacob and Alex Anderson of Pasco, 5 brothers and sisters and their spouses, 12 grandchildren, 2 great-grandchildren, numerous nieces and nephews, his BBCC family, his brothers and sisters of Unchained, and many close friends. Services will be Friday 16th at the Church of Jesus Christ of LDS, 925 N. Grape Drive, Moses Lake. Viewing from 1pm-2pm. Service at 2pm followed by graveside service at Pioneer Memorial Cemetery. In lieu of flowers, memorial donations can be made to Unchained Brotherhood in care of Zane Peterson 215 Beale Ave. Moses Lake WA 98837

Longtime Moses Lake resident John &#8220;Professor&#8221; Clifton Anderson passed away peacefully on March 8th, 2018 at his home in Pasco, Wa in the company of his loving wife of 40 years and family after battling several medical conditions... View Obituary & Service Information

The family of John Clifton Anderson created this Life Tributes page to make it easy to share your memories.