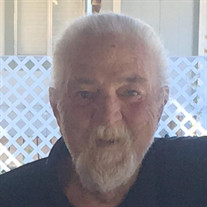 Jerry Wayne Dalton OCT 7th 1942-January 2nd 2018 Jerry was born on Oct 7, 1942 in Mullen, Idaho to Charles Albert Dalton and Ada Violet Poindexter. He married Karen Jean Hare on June 13th 1964 in Heyburn Idaho. They have four sons: David (Karen), Donald (Eva), Daniel (Maria) and Darrel (Debbie). He had three brothers: Jim (Jeri), Charles (Patty) and William (Barb). Three Sisters Elsie, Dorothy (Lonnie) Durfee and Bonnie (Bob) Gray. Three half-brothers: Robert (Tina) Morrison, Johnny Morrison, Alvin (Becky) Hill, Two half-sisters: Ruth Ellen Morrison, Susan (Bubba) Robertson. Seven Grandchildren: Daniel Jr., Sean, Shayla, Janeva, Vanessa, Analiese, Katarina and 1 great grandchild Adalia. They made their home is San Diego, California as Jerry was in the Navy. They returned to Burley, Idaho where Jerry worked two jobs to support his family. In the summer of 1970, we moved to Prineville, Oregon where Jerry worked at Coin Millwork until they sold the mill. Jerry and Karen moved to Moses Lake, Washington in 1973 where Jerry worked for Ladd Irrigation, Basin Propane, Mid-West Agriculture as well as others places until his retirement. He enjoyed camping, fishing with family and loved watching all kinds of sports on TV. Jerry loved going and having coffee with the guys at McDonalds and catching up on all the gossip. He will be greatly missed by all his family and friends, but never forgotten. Per his request there will be no services. Interment will be at the Washington State Veterans Cemetery in Medical Lake at a later date. Please sign the online guestbook or leave a note for the family at www.kayserschapel.com Arrangements are in care of Kayser's Chapel & Crematory.

The family of Jerry Wayne Dalton created this Life Tributes page to make it easy to share your memories.