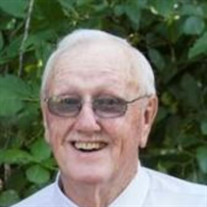 Jerrold Delane Hoing passed away peacefully with his family by his side on May 8, 2021 at Booker Rest Home in Dayton Washington at the age of 83. A private family funeral will be held at St. Michael’s Catholic Church in Royal City on Saturday, May 15 at 11:00 am. Interment services will be open to the public at the Royal Memorial Gardens at approximately noon. Condolences can be made online at www.kayserschapel.com Jerry was born on the family farm to Nellie and William Hoing in Kimball, South Dakota on April 17, 1938. He graduated from Kimball High School in 1956. Jerry married his high school sweetheart Betty Carole Montgomery on October 27, 1956. They worked on the Hoing family farm until moving to Royal City in 1959. Once in Royal City, Jerry and Betty opened the Chevron gas station, which they owned and operated for 50 years. Jerry was considered by many as a great mechanic, jack-of-all-trades, and handyman, but more than anything he was a great man. He always had an open door for people in need; whether they were family members or strangers who had broken down on the highway and needed their car repaired, a hot meal or a place to stay for the night. Jerry worked several other jobs to support his growing family. He worked as a security guard at the missile base, drove school bus, had the town garbage route, had an auto sales business, car wash and built a mini storage for the town of Royal City. Jerry and Betty even had the first post office in town in 1959. Jerry was very active in the community. He served as a City Councilman, was on the St. Michael’s parish council, was a long-time member of the Moose Lodge, a member of the Lions Club, Royal City festivals board member, and a volunteer fireman. He also worked on the sideline crew (chain-gang) for the Royal Football program for more than 30 years. In the early years Jerry enjoyed spending time with friends riding snowmobiles and motorcycles and going pheasant hunting on the Royal Slope. He owned and maintained all the golf carts for the Royal City golf course where he and Betty enjoyed playing golf with community members. Jerry and Betty enjoyed spending the winter months in Yuma Arizona with several of their local friends. Jerry’s true passion was watching his children and grandchildren play sports, going to yard sales, and collecting and restoring vintage John Deere tractors. He is survived by his loving wife Betty Hoing, brother James Hoing, sister Margie O’Brien , children and spouses; Karla and Jerry Scott, Waitsburg, WA, Kathy and Mitch Mathews, Dayton, WA, Brenda and Howard Schuller, Warden, WA, Barb Hoing, Wenatchee, WA, Jerri and Bryan Mickle, Ephrata, WA, Amy Hoing, Seattle WA; 14 grandchildren and 21 great grandchildren. He is preceded in death by his son David Hoing, Seattle, WA, his mother and father Nellie and William Hoing, and brothers Neil and Nellis Hoing

Jerrold Delane Hoing passed away peacefully with his family by his side on May 8, 2021 at Booker Rest Home in Dayton Washington at the age of 83. A private family funeral will be held at St. Michael&#8217;s Catholic Church in Royal City on Saturday,... View Obituary & Service Information

The family of Jerrold Delane Hoing created this Life Tributes page to make it easy to share your memories.

Jerrold Delane Hoing passed away peacefully with his family by...