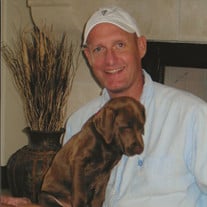 JEFFREY VANIS BACON October 7, 1958 – November 7, 2019 Whether it was fishing, his dog Keta (whose name is actually Japanese for dogfish), hunting, or a great round of golf, it didn’t take much to make Jeff a happy camper! Born in Moses Lake to Joan (Baird) and Bill Bacon, he arrived three months early. He always knew how to make a great and often unexpected entrance. Jeff was predeceased by his father. He is survived by his mother, Joan Johnson, and three siblings; Kathleen Bacon Duncan (Hamilton), Todd Bacon (Jan) and Gary Bacon. Jeff spent most of his adolescence in Olympia, Washington, with occasional forays to Ephrata. His adult years would find him traveling from hither to yon, and all points in between. One of his greatest accomplishments, and one that brought him overwhelming pride and joy, was obtaining his CNA degree in Vero Beach, Florida. He then became a live-in caregiver to John, who had been bedridden with MS for 20 years. When Jeff first began caring for him, John had no communication skills remaining. Jeff spent every day talking to John as if they were two buddies out on a fishing boat. To everyone’s amazement, one day John started talking back. It was truly one of the highlights of Jeff’s life. He treasured their relationship, and cared for John for the remainder of his life. The story of Jeff’s life is a colorful one – maybe not completely suitable for a family publication! – but always entertaining and highly amusing. To know Jeff was to love him, to curse him, and at the end of the day, to always want him to continue being Jeff. He made many dear friends along his paths of travel; some of his most cherished were Ken Slininger (Ephrata – and his ever tolerant wife, Gail), Russ Long and Lisa Kavanaugh (Tacoma), Anthony Martino (Vero Beach, Florida), and Connie Porteous (Jensen Beach, Florida). God love ‘em for all they’ve done on his behalf over the years! Though our hearts ache at an exit made too early, we take solace in knowing he’s now happily entertaining those who have gone before him – bringing laughter, inventing tall tales, and best of all, fishing where no license is required! Those of us left behind for now, will miss him more than words can describe, and look forward to the day when we, too, can once again cry tears of laughter. A Celebration of Life will be held in Ephrata and Olympia at TBD dates in the near future.

JEFFREY VANIS BACON October 7, 1958 &#8211; November 7, 2019 Whether it was fishing, his dog Keta (whose name is actually Japanese for dogfish), hunting, or a great round of golf, it didn&#8217;t take much to make Jeff a happy camper! Born... View Obituary & Service Information

The family of Jeffrey Bacon created this Life Tributes page to make it easy to share your memories.