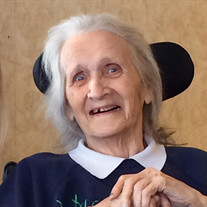 Jeanne E. Plaisted, 92, a resident of Moses Lake went home to be with the Lord in the early morning hours on Friday, March 17, 2017 at Summerwood Care Center. A funeral service will be held at 10:00 a.m. on Friday, March 24, 2017 at the Church of Jesus Christ of Latter-day Saints Nelson Road Chapel. Interment will be at Pioneer Memorial Gardens. Please sign the online guestbook or share a special memory of Jeanne with the family at www.kayserschapel.com Arrangements are in care of Kayser's Chapel & Crematory, Moses Lake. Jeanne was born in 1924 in Towanda, Illinois, the younger of 2 daughters, growing up on the family farm during the Great Depression. She loved being outdoors and had a horse that she rode to a one room country school. When World War II broke out, she joined the Nursing Corps. It was there that she met her future husband, Mel Plaisted, a Staff Sergeant in the Army Air Force, who was stationed at Chanute Field near Chicago. They were married in 1945. After the war, they farmed with her father in Illinois for a few years, then they moved to the Columbia Basin in 1952. they arrived with 3 young children in a pickup truck, pulling a trailer loaded with all of their belongings, including an old John Deere tractor. they homesteaded on 99 acres of sagebrush south of Moses Lake near Potholes Reservoir. They built a home and she planted lots of trees around it, similar to her home in Illinois. Two more children were born in Moses Lake. Over the years, she worked hard at being a good mother and a farmer's wife. She learned to drive a tractor and a truck. She raised beautiful flowers and a big garden. She was active in the 4-H club for many years. Her pies and wheat bread always won blue ribbons at the county fair. She an Melvin loved to dance. They were the original founding members of the 4X8 Square Dance Club. They were also early members of the O'Sullivan Grange. Some of her hobbies were reading romance novels (large stacks!), cooking, sewing, crocheting, reupholstering, genealogy and traveling. She's been to Mexico, Ireland and Germany as well as most of the 50 states. She once said with a smile about growing old, "Of all the things I've lost, I miss my mind the most." Jeanne was preceded in death by her husband Melvin F. Plaisted, 3 children Alice Joan, Arther Lewis, Allen Lamont, and one granddaughter Melanie. She is survived by 5 children, Judith Lynn, John Leslie, James Leon, Jeffery Cameron, Joseph Lloyd, 24 grand and 4 step grandchildren, 65 great grandchildren, and 4 great-great grandchildren.

Jeanne E. Plaisted, 92, a resident of Moses Lake went home to be with the Lord in the early morning hours on Friday, March 17, 2017 at Summerwood Care Center. A funeral service will be held at 10:00 a.m. on Friday, March 24, 2017 at the Church... View Obituary & Service Information

The family of Jeanne Plaisted created this Life Tributes page to make it easy to share your memories.