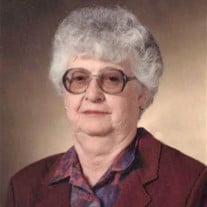 Jeanne P. Bailey, 94, a resident of Moses Lake passed away Thursday, July 27, 2017 at McKay Healthcare and Rehab in Soap Lake. Viewing will be from 1-1:45 p.m., Thursday, August 3, 2017 at New Beginnings Christian Center, 318 W. Northshore Drive, Moses Lake followed by funeral services at 2:00 p.m. Please sign the online guestbook or leave a note for the family at www.kayserschapel.com Arrangements are in care of Kayser's Chapel & Crematory. Jeanne was born on February 10, 1923 in Syracuse, Kansas, daughter of the late Paul and Jessie (Hall) Holdren. She was raised and educated in Syracuse. Jeanne was married to Loren Bailey in St John, Kansas on March 28, 1942. She was an army wife during World War II. All enjoyed her excellent cooking and she was an active musician playing piano, organ and accordion for many churches. For the 1974 World Expo in Spokane, Jeanne played the accordion for the CanCan Dancers of Republic, Washington. She was a member of the Grant County Community Action Council in Ephrata. Survivors include four children, Larry L. Bailey, Barbara (Wayne) Searcy), Loren L. Bailey, Jr., and David L. (Barbara) Bailey; numerous grandchildren, great and great-great grandchildren. Besides her parents and husband, Loren, she was preceded in death by all of her siblings, Beth (Bill) Helm, Robert (Agnes) Holdren and Bill Holdren. Jeanne was an exemplary wife, mother and grandmother and she will be greatly missed by all who knew her. A big thank you to her caregivers.

The family of Jeanne Pauline Bailey created this Life Tributes page to make it easy to share your memories.