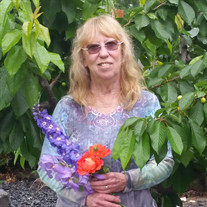 It is with great heartfelt sorrow that we announce the passing of our beloved Janet Covington Burdine, as she has been taken by the hand of Jesus and led home. She was an Amazing Wife, Mother, Grandmother, Sister, Aunt, Cousin and Friend; whom will be sincerely missed by all. Janet Covington Burdine was born January 8, 1951, (age 68) in Yuba City, CA. Janet passed away peacefully on Wednesday, November 6, 2019 at Sacred Heart Hospital in Spokane, WA. She is preceded by her parents Dorothy Jean Chandler and Walter Covington of Yuba City, CA. and one brother, Randy Wayne Covington of Yuba City, CA. She was born to the late Dorothy Chandler Covington and Walter Covington.. On August 29,1969- Janet gave birth to her Son, Robert Broyles. Robert was Janet’s entire world from the time she met her precious son that day, and for the rest of her life. Nothing lit up the room like the light in her eyes when Rob walked in. On November 25th, 1975 she married the love of her life, Mr. Howard “Buck” Burdine in a quiet ceremony in Granger, WA. Howard and Janet eventually moved to the beautiful “Lake Town” of Moses Lake, WA, where they bought a beautiful home, worked their orchards and enjoyed their precious family. This became “Home” for Janet. Despite her hectic schedule, her family and friends were Janet’s passion and delight. As a Professional Caregiver with such a big heart, Janet; a loving mother and homemaker, was a remarkable cook and enjoyed preparing meals for her family and friends to enjoy. She loved to hear their laughter and enjoy their company. Janet also had a great passion for gardening and growing beautiful flowers, plants, fruit trees and vegetables. Her yards were the envy of all whom were ever at her home or drove by. If you ever had the blessing of seeing her working in her yards, you ALWAYS saw that beautiful smile of hers. Something we will ALL miss! Janet is survived by her Husband; Howard Burdine, her son Robert Broyles and his wife Imelda of Moses Lake, WA. Her Brother; Gerry Sevenau Sr. and his wife Kathleen, of Yuba City, CA, Sister; Judy Schnabel and her husband John, of Yuba City, CA, Brother; Rick Covington of Sacramento, CA, Brother; Walter Covington and his wife Druscilla, of Yuba City, CA, Sister, Deborah Covington Stevenson and her husband Larry, of Sutter, CA. Her Step Mother; Lorna McBride of Roseburg OR, Step Brothers Donald McBride, Ronald McBride, and Roger McBride, all of Roseburg OR. Her Grandchildren; Kris Broyles, Adam Broyles (Fiancé Skylar), Benjamin Broyles, Yanni and Fabian Nunez, Alvin and Lizet Melara, Janet is also survived by Six Beautiful Great Grandchildren and numerous Cousins, Nieces and Nephews whom ALL loved her very much. For those who have known Janet in her loving journey with us, her graveside service will be held Saturday November 16th at 1:00pm at Kayser’s Memorial Chapel at 831 S. Pioneer Way, Moses Lake, WA. 98837. There will be viewing on Friday the 15th from 5:00pm to 7:00pm.

It is with great heartfelt sorrow that we announce the passing of our beloved Janet Covington Burdine, as she has been taken by the hand of Jesus and led home. She was an Amazing Wife, Mother, Grandmother, Sister, Aunt, Cousin and Friend; whom... View Obituary & Service Information

The family of Janet Burdine created this Life Tributes page to make it easy to share your memories.

It is with great heartfelt sorrow that we announce the passing...