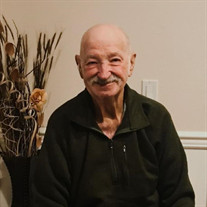 James “Jim” Lee Stillwell of Moses Lake, Washington passed away on Friday, April 8, 2022 at the age of 86. Jim died peacefully with his children and grandchildren by his side. Jim was born in Cushing, Oklahoma in 1936 to Calvin and Alma. He was raised in Pampa, Texas alongside his sister and four brothers. At the age of 17, Jim was so eager to serve his country, he lied about his age to enter the military. Before long, it was discovered that he was underage and he was released from his duties. At the age of 19, Jim reenlisted in the Airforce. His service spanned 20 years until his retirement in 1975. During his time in the Airforce, Jim had the opportunity to travel the world and live in many different states. A Vietnam veteran, Jim was very proud of his military career. Jim was married 3 times. He and his first wife Dixie had his first daughter Debra. Jim and his second wife Sandra had 3 children together, Sharon, Tammy, and Jimbo. In 1968 he married the love of his life Judy. Together, they had two children, Jeannie and Jason. They loved animals and always had a faithful dog by their side. The family settled in Moses Lake, Washington in 1987. Jim worked for the Moses Lake school district as a custodian until his retirement, and he was an involved member of the Eagles Lodge for many years. Family was very important to Jim. He loved to spend long weekends camping with family and friends in Daisy, Washington. He cherished time with his grandchildren and played an integral role in their upbringing. He would often drive them to and from school and stop at the gas station for an afterschool treat. He devoted countless hours researching his family history and especially enjoyed creating and dispersing yearly calendars that detailed family birthdays and anniversaries. Jim proved himself to be a devoted husband, father and grandfather. His memory will forever be cherished in the hearts of his loved ones. “A father like you is rare, one that’s so generous, smart and kind. A father like you is what everyone needs, full of smiles and laughter, always doing great deeds. Nothing can replace a father like you, but when you get to heaven, God will be lucky to have you too.” Jim was proceeded in death by his parents, sister Patsy, two brothers John and Mike, grandson Jason, granddaughter Elizabeth and his beloved wife Judy. He is survived by his brothers Vernon and Tom; children Jeannie, Jason, Debra, Sharon, Tammy and Jimbo; numerous grandchildren, great grandchildren and his dog Howdy. A service for Jim will be held at Kayser’s Chapel of Memories in Moses Lake, Washington on Saturday, April 16th at 12 PM. Graveside services complete with military honors will immediately follow at Guarding Angels Cemetery.

James &#8220;Jim&#8221; Lee Stillwell of Moses Lake, Washington passed away on Friday, April 8, 2022 at the age of 86. Jim died peacefully with his children and grandchildren by his side. Jim was born in Cushing, Oklahoma in 1936 to Calvin... View Obituary & Service Information

The family of James Lee Stillwell created this Life Tributes page to make it easy to share your memories.