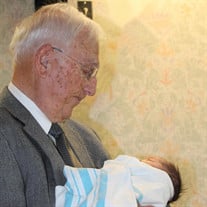 James Allen Pyle was born May 5, 1931 in Connellsville, PA to Ray Josiah and Margaret Pearl (Barnes) Pyle. He was the first of three children, his sisters, Jackie and Joan, followed seven and twelve years later, respectively. Dad had a very happy childhood growing up in the hills of Pennsylvania. When they finally moved to town he made some life-long friends and he loved to tell stories about their escapades. When it came time for him to leave home he joined the United States Navy and was stationed on an aircraft carrier at Pawtuxet Naval Air Station in Maryland. While stationed there he met and fell in love with Mary Eleanor Christian. Jim and “Chris” were married in 1954 and were soon transferred to Naval Station Whidbey Island where the first of their three children, Kathy, joined them. It wasn’t long before they were expecting Sandy, but since Jim was going on temporary duty to the Aleutian Islands, he sent Chris to her home in Mississippi for that birth. The family was then transferred to McKeesport, PA. While visiting family in Connellsville Terry decided that now was the time to make his debut. Jim transferred to the Air Force to finish out his 20 year military career. They were stationed in New Jersey, Paris, France, Mississippi, California and finally Othello, Washington. They settled in Moses Lake instead of Othello and have called Moses Lake home ever since. While stationed in Mississippi they became members of the Church of Jesus Christ of Latter-Day Saints. Jim held many different callings, all of which he enjoyed. His favorite callings were working with the youth where he made many good friends. Jim was preceded in death by his daughter, Kathy Fisk. He is survived by his wife, Chris (Mary), children Sandy and Terry (Susan), son-in-law Mark, grandchildren James Fisk, Dustin Fisk, Tyson Pyle, A.J. Pyle, Lilly Leonard, Megan Killian, Zoey Bown and Tessa Pyle, and nine great-grandchildren.

James Allen Pyle was born May 5, 1931 in Connellsville, PA to Ray Josiah and Margaret Pearl (Barnes) Pyle. He was the first of three children, his sisters, Jackie and Joan, followed seven and twelve years later, respectively. Dad had a very... View Obituary & Service Information

The family of James Allen Pyle created this Life Tributes page to make it easy to share your memories.