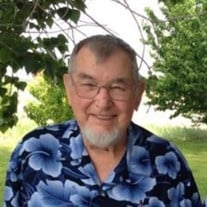 On November 28, around 3:45 in the afternoon, Jim’s prayer of several years was answered when Jesus said, “It is time. Jim, you can come home now.” Although his family was not able to be with him, a peaceful and quick death was what he always hoped for. James Howard Mullin was born on May 6, 1927 at home in Gridley, California. He grew up on a farm with his three brothers and one sister in Scott Valley, CA. A lifelong prankster, he had many stories of shenanigans growing up. After graduating 8th grade in 1942, he started working for the US Forest Service. He reminisced fondly of the time spent alone as a lookout, saying that it didn’t bother him to be alone. In 1946, he started work on a ranch in Etna, CA. From the stories he told, he was a calm and understanding horseman. He was drafted into the Army in 1950 and was stationed in Hanford, WA as a radar operator. In 1952, he met Juanita Deweber after his sergeant had married her sister. A whirlwind courtship followed and they were married on December 26, 1952. He took pride in and was very thankful for their marriage of 65.5 years. They settled in Pasco, WA and began raising a family. Jim worked for the PUD and went back to school at CBC and got his AA in auto mechanics. When the family relocated to Republic to help plant a Nazarene Church and later to Omak to help build up the existing church community, he found work as a mechanic and truck driver. In 1986, he managed apartments in The Dalles, OR and later drove school bus before caretaking a house on the Columbia River. Jim and Juanita left The Dalles in 2002 and moved to Moses Lake where they helped take care of their son’s property until health and old age prevented them. Faith was very important to Jim and he loved to tell the story of being born again at a church revival. He was innovative and creative - from rigging up a shower in a campground at Mount Rainier to making a 40 Mule Borax Team and chickens out of balsa wood. He was proud of his family and loved to see them, looking forward to the meals eaten together. He enjoyed word searches, solitaire, YouTube, telling jokes and stories, and Louis L’Amour books. He was a home body, and as he aged he looked forward to his eternal home. That longing intensified when Juanita preceded him in death in 2018. We know he’s happily reunited with her and looks forward to seeing us up there. He is survived by his children Terry (Debbie) of Moses Lake, Carleen (Tim) Tucker of Moses Lake, Jim (Trisha) of Bruff County Limerick, Ireland, David (Andrea) of Peoria, AZ, and Jerry (Angela) of Centralia; 21 grandchildren; 34 great-grandchildren; and his extended family. He was preceded in death by his parents, 4 siblings, his wife, and 2 grandsons. Arrangements for a service celebrating his life have not yet been made. The family wishes to thank the staff at Columbia Crest for providing good care for Jim this year.

On November 28, around 3:45 in the afternoon, Jim&#8217;s prayer of several years was answered when Jesus said, &#8220;It is time. Jim, you can come home now.&#8221; Although his family was not able to be with him, a peaceful and quick death... View Obituary & Service Information

The family of James Howard Mullin created this Life Tributes page to make it easy to share your memories.