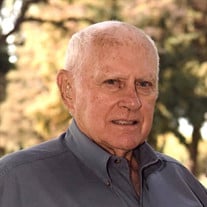 James "Jim" Campbell passed away at home on July 12, 2018, with his wife by his side after fighting a four year battle with cancer. Jim was born in Great Falls, Montana on January 18, 1928 to Jim and Alice Campbell. Jim had a sister, Alice Kathleen and a brother, Louis Michael. They moved to Spokane in 1939. In 1946, Jim graduated from Lewis and Clark High School in Spokane. He served as a Corporal in the United States Army from 1946 to 1949as part of the occupation forces in Japan following the war. He was a heavy equipment operator in the Eighth Engineers attached to the First Calvary Division. On April 2, 1950, Jim married Marianne Leaf and they had four children. They were married for 68 years. From 1950 until 1958, Jim was a wholesale bread driver and from 1958 until 1963,he was a salesman for the Heidelberg Brewing Company. In 1963, Jim moved the family to Moses Lake and operated Campbell Distributing selling beer and wine. The family business was sold in 1995. Jim made it his goal to help everyone he met have a better day. Jim created the Hearthstone Men’s Club at Hearthstone Senior Living in Moses Lake and was in charge of day trips for residents for 10 years. He was also involved with the Sandy Sam’s RV Club. Jim and Marianne enjoyed many trips throughout the United States and abroad. He always had a story to tell and shared his love for life. His family was the most important thing to him, and there is an emptiness in the world now that he is no longer here with us. Jim was a dedicated supporter of the blood bank. He donated 85 pints of blood during his lifetime, and was a volunteer for the Inland Northwest Blood Center for several years. In his later years, Jim started writing his life story. Each year, updates to the narrative and accompanying pictures were handed out to relatives at Christmas to add to their binder. As it ends in July 2018, Jim’s life story exceeds 300 pages. He is survived by his three children Debbie Campbell(Larry Kolb), David Campbell (Jennifer) and Suanne Moon (Bob). He is also survived by grandchildren Melanie Strevy (Chad), Chris Campbell (Tina), Curt Ledeboer, Shelby Collins(Blair) and Lilly Campbell; as well as numerous nephews, nieces, great grandchildren, great nephews and great nieces, and great-great grandchildren. Jim was preceded in death by his daughter Sally Ann (died hours after birth), parents Jim and Alice Campbell, and siblings Alice Kathleen Watson and Louis Michael Campbell. Services will be held on Friday, July 27 at 2:00 pm at Moses Lake Presbyterian Church, 1142 W. Ivy. Please sign the online guestbook or leave a note for the family at www.kayserschapel.com Arrangements are in care of Kayser’s Chapel of Memories. In lieu of flowers, the family asks that a donation be made in Jim’s name to the Columbia Basin Cancer Foundation.

James "Jim" Campbell passed away at home on July 12, 2018, with his wife by his side after fighting a four year battle with cancer. Jim was born in Great Falls, Montana on January 18, 1928 to Jim and Alice Campbell. Jim had a sister, Alice... View Obituary & Service Information

The family of James "Jim" Campbell created this Life Tributes page to make it easy to share your memories.