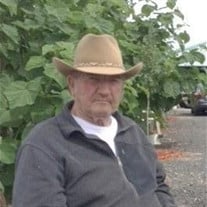 James B. Bolyard of Warden, passed away on January 13, 2017 at his home at the age of 83 from acute leukemia. Jim was born in Garfield, WA on September 7, 1933 to James L. and Gaie (Trimble) Bolyard. He grew up in the Columbia Basin area and graduated from Coulee City High School in 1952. He took a job building the new high school in Garfield where he met Karen Johnston. He was drafted into the Army and served in Korea in F Company, 63rd Infantry Regiment, 6th Infantry Division. After he came home from Korea, he returned to Whitman County to work for his cousin Gene Marple who was a spray pilot. Here he learned and loved to fly. He married Karen Johnston on November 17, 1956 in Spokane, WA. They had celebrated their 60th wedding anniversary just before Thanksgiving this year with their children and their families. During the early years of their marriage Jim, Karen and family lived in Ephrata, Odessa and Coulee City. Among the jobs he worked, Jim worked for Boeing as a member of the crash crew in Moses Lake. They moved back to Whitman County where he worked for J.E. Love Co., Oakesdale Implement, Arrow Machinery, Alan Wride, Ed-Ka Manufacturing and the City of Garfield. During the 1980's he was a member of a 4 piece country western band know as The Sun Downers. Jim was the lead guitarist and the band played mostly in Deary, ID although they played local weddings, anniversaries and birthdays. They later changed their name to the Silver Creek Band. They moved to Lind, WA where Jim went to work for T-16 Ranch and worked there until he retired. He then became a rural route carrier for the Columbia Basin Herald where he carried papers for 19 years, up to the time of his illness and death. Jim loved to visit with people. He would share jokes and stories, tell tales of his life's experiences. He was very knowledgeable of the history of the areas in which he lived and enjoyed talking with people about what he knew. He enjoyed fishing the St. Joe River and Dworshak Reservoir in Idaho and the many lakes in the Pot Holes area. Jim is survived by his wife Karen (Johnston) Bolyard and 5 children: Ken and Sarah (Hougland) Bolyard, Richard and Vanessa (Bolyard) Gimlin, Teresa Bolyard, Scott and Carmen (Fealy) Bolyard and Steve and Nannette (Mearns) Bolyard. He has 11 grandchildren and 7 great-grandchildren. The family will celebrate his life at a gathering later in the year when the weather permits better travel. All of his family and friends will be invited to this event. Please go to www.kayserschapel.com to share your thoughts and stories with the family of how Jim touched your life. The family wishes to thank Dr. Tucker and Dr. Quinn, the Assured Hospice of Moses Lake staff and Kayser's Chapel and Crematory for their help and support through this most difficult time.

James B. Bolyard of Warden, passed away on January 13, 2017 at his home at the age of 83 from acute leukemia. Jim was born in Garfield, WA on September 7, 1933 to James L. and Gaie (Trimble) Bolyard. He grew up in the Columbia Basin area and... View Obituary & Service Information

The family of James "Jim" Bolyard created this Life Tributes page to make it easy to share your memories.