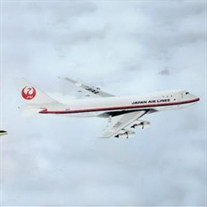 James Elmer Abram August 12, 1929 - February 22, 2018 James Elmer Abram passed away peacefully after a courageous battle with cancer. Born in Jasper County, Missouri on the family farm, August 12, 1929 to Eva Ann Stroup and John Elmer Abram. Growing up on the family farm, Jim completed his elementary and secondary school before enlisting in the Army. After two years in the service he came home and did one year of community college, focusing on pre-engineering. On October 9, 1949 he married the love of his life, Louise Kirksey. They had 68 years of life, full of love, travel & companionship, Louise at his side supporting him in all his visions and many business ventures. Before moving to the Columbia Basin,they lived in several cities, ultimately buying a business and settling in Moses Lake in 1957. He and Louise were the owners/operators of the Conoco Bulk Plant. After selling the bulk plant his next vision was to come up with a way to bring airline companies to Moses Lake to train their pilots. With the help of Senator Magnuson, that dream became a reality, resulting in the creation of JETT-AERO, which provided aircraft ground support & fueling services. After the sale of JETT-AERO, Jim continued on the Board of Directors for the Washington Trust Bank in Spokane. He also remained focused on start-up companies that exhibited a vibrant, entrepreneurial spirit, from new and innovative developments in agriculture, to SPACE-X and other forward-thinking endeavors. Jim was an avid fisherman and hunter, but let’s not forget master gardener… always challenging friends to see who could grow the biggest tomato! Jim, a man of faith, lived by example. He was a gentleman, a man of integrity. He encouraged those who knew him well to strive to be their best. He will be missed by many. Jim is survived by his wife Louise, their daughter Teresa and son-in-law Clyde Gies of Moses Lake, sister-in-law Leeanna Kirksey of Portland Oregon, granddaughter Megan, two great-grandchildren, Nicholas and Samoa and several nieces & nephews. At Jim’s request there will be no service. In lieu of flowers, the family suggests that donations may be made to the following organizations: Big Bend Community College Commercial Pilot Training Program Billy Graham Evangelistic Foundation Fred Hutchinson Cancer Research Center Hospice of Spokane Moses Lake Christian Academy

The family of James "Jim" Abram created this Life Tributes page to make it easy to share your memories.