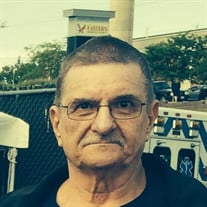 James Robert Eloff was born March 25, 1946 to James and Johanna Eloff in Great Falls, Montana. He lived in Great Falls until the age of 22 when he relocated to Seattle in 1968 with his newlywed and local farm girl, Elaine Grace Smiley, and their newborn son, Travis Michael Eloff. In Seattle, Jim worked for Boeing and then Meltec, a steel foundry, until moving back to Montana in 1978. There, he worked in the concrete construction business for 16 years, then was the maintenance supervisor for an assisted living facility where he enjoyed conversing with residents who he grew to cherish. After the divorce from Elaine, he returned to Seattle and rejoined his friends at Meltec until retirement. Upon retirement, he moved to Ephrata, Washington to be near his son. Jim was an outgoing person with many friends. While in Seattle, he formed many relationships which lasted his entire life and his home was always open to frequent visits as friends and family would travel for his annual gatherings which included pig roasts, horseshoe tournaments, and volleyball games. Among his accomplishments aside from being a husband and father, Jim purchased land in central Montana and built a cabin with the help of his wife, brother, and many friends. He also partnered with a childhood friend to purchase a fishing license in Alaska. They bought equipment and constructed a net for their beach seiner’s license. He built another cabin on site and was prepared for his next adventure when the oil spill from the Exxon Valdez prevented fishing there for many years to come. Jim passed away peacefully on Monday, February 8, 2021. He is survived by his brother, Ron Eloff, his sister, Marianne Sanders, his son, Travis Eloff, and his former wife, Elaine Eloff, with whom he maintained a caring relationship. He has two granddaughters, Melodie Pagliaro and Brand Eloff, who he is very proud of. James will be cremated and his remains will be kept by his son. The family has decided not to have a service, but friends and relatives are encouraged to post a memory on this website if they so desire.

James Robert Eloff was born March 25, 1946 to James and Johanna Eloff in Great Falls, Montana. He lived in Great Falls until the age of 22 when he relocated to Seattle in 1968 with his newlywed and local farm girl, Elaine Grace Smiley, and... View Obituary & Service Information

The family of James Robert Eloff created this Life Tributes page to make it easy to share your memories.