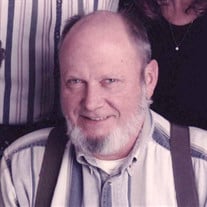 James F. Byrd of Moses Lake, formerly of Auburn & Maple Valley, WA passed away on July 30, 2017 in Moses Lake, WA. Jim and his sister, Janet, were born in Seattle on November 30, 1938 to Frank & Elizabeth Byrd. Jim graduated from Highline High School in 1957. He was a machinist at American Can Company, retiring in 1992and later at King County Metro Sewage Treatment Plant retiring again in 1998. As a young man, he learned to cook in his family’s restaurant, and loved to entertain and feed groups of people. Jim loved the outdoors, was an avid fisherman, hunter, camper and gardener. He looked forward to the annual hunting trip and his Elk Camp was infamous on Bald Mountain, rivaling most outfitter's camps. He loved to cut down trees with his chainsaw and stack cords of firewood to feed the wood stove. Jim figured there was always a way he could re-engineer and modify an item to fit his needs better. He spent many an hour at the local hardware store looking for just the right item. Nothing was better than playing poker with his grandchildren and taking their money, teaching them all how to bluff the hard way. He built two homes with his wife in Auburn and Maple Valley along the Cedar River. Jim was a gentle man whose positive attitude made a lasting impression on all those who knew him. Jim is survived by his wife Sharon (Hayett) Byrd of 58 years, two children Becky Byrd& Jay (Renee) Byrd, 5 grandchildren Elizabeth Byrd-Obritsch, Gwendolyn (Peter) Ellis, Michael (Samantha) Byrd, Kyle (Kelsey) Byrd, Jenna Byrd and 5 great grandchildren: Kane, Brooks, Blake, Cooper & Norah. Services will be held Saturday, August 12, 2017at 11:00 am at Kayser's Chapel of Memories, Moses Lake.

The family of James Byrd created this Life Tributes page to make it easy to share your memories.