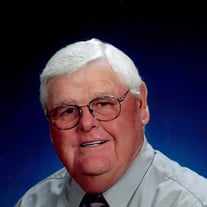 Jack Hendrix passed away on January 28, 2022. He was born in 1939 on a farmstead near Colony in SE Kansas, the son of Ross and Dorothy Hendrix. Jack married Kay Essmiller in 1964. They adopted their only child, Chad, in 1972 when he was 6 days old. He was an involved father and was very proud of their son and grandchildren. Jack was a worker and always had many irons in the fire. He began his adult life by graduating from Kansas State University, Manhattan, KS in 1962 with a BS in agronomy – debt free. He had worked part time during school and full time in the summer inspecting certified wheat fields for the Kansas Crop Improvement Assn. He served in the Kansas National Guard for 8 years during and after college. Jack worked in wholesale, retail and management. Early in his career Jack became a licensed private pilot, a skill he used to land a job with J R Simplot covering the states of Colorado, New Mexico, Arizona, Nebraska, Kansas and Oklahoma by private plane. Simplot transferred him to Nebraska and later to Moses Lake, WA in 1976, where he worked for them until 1990. He farmed part-time for the next 10 years, while working for Custom Chemical, Warden, Washington sprout nipping potato storages. He was able to become a full time farmer in 2000. He and his partners grew certified wheat seed, specialty crops and had numerous research plots for WSU and specialty contracted companies. He was a leader and active participant in the industries he served and the communities they lived in. He was elected president of the Kansas Fertilizer & Chemical Institute in 1972 and president of the Far West Fertilizer Association in 1983. He served in leadership positions and was active in Boy Scouts, Jaycees, Moses Lake school board, Moses Lake Chamber of Commerce, Big Bend Community College as an instructor for the Japanese Extension Agents, Grant County Fair Board, PCO, Dutch Oven Society, Washington State Turfgrass Seed Commission and several other organizations. Jack appreciated the outdoors, enjoyed fishing and cooking in Dutch ovens. In December, 1980 Jack and partners purchased Ross Lake Resort in the North Cascades National Park. He was a true salesman and could talk with anyone, anywhere at any time - was in his element when he had someone to swap stories with. Jack will be remembered for his endless stories, ready smile, the twinkle in his eyes, infectious laugh and positive caring attitude. Survivors include his wife Kay of 57 years, son Chad Hendrix (Lisa) of Pasco, granddaughter Rebekah Hendrix of Stevensville, MT and grandson Tyler Hendrix of Pasco, his sister Mary (Bob) Owen of Chanute, KS and numerous nieces and nephews. Jack was preceded in death by his parents, his sister Jean Edwards and his brother Charles Hendrix. Memorials may be made to Samaritan Healthcare Foundation, 801 E Wheeler Road, Moses Lake, WA 98837 towards a new, state-of-the-art replacement hospital on a comprehensive medical campus on Yonezawa Boulevard adjacent to Lowe’s and the CB Technical Skills Center. Celebration of Life service will be held at the Moses Lake Presbyterian Church on March 12, 2022 at 2:00 pm with Pastor Curt McFarland officiating. Reception to follow immediately. Arrangements are under the care of Kayser’s Chapel & Crematory with burial at Guarding Angel Cemetery.

Jack Hendrix passed away on January 28, 2022. He was born in 1939 on a farmstead near Colony in SE Kansas, the son of Ross and Dorothy Hendrix. Jack married Kay Essmiller in 1964. They adopted their only child, Chad, in 1972 when he was 6 days... View Obituary & Service Information

The family of Jack Hendrix created this Life Tributes page to make it easy to share your memories.