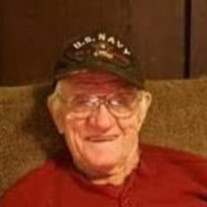 J "Chappy" Lide Chapman J Lide Chapman passed away on August 18, 2020 in Battle Ground, WA from natural causes. He was 95 years old. Several family members were able to say their goodbyes just before his passing. He was very much loved by his family and friends, and will be truly missed. Viewing will be held on Wednesday, August 26, 2020 at Kayser's Chapel & Crematory located at 831 S Pioneer Way in Moses Lake, WA from noon to 1:00pm. At 1:30pm there will be a graveside memorial held at Guarding Angels Cemetery located at 2595 Rd L NE in Moses Lake, WA. Unfortunately, due to the Covid 19 pandemic, only a few family members and friends will be able to attend. J was born on October 11, 1924 in Burley, ID to Lide and Nellie Chapman. His siblings consisted of three brothers and three sisters. J's family resided in Burley, ID until he was around 8 years old. Unfortunately, due to the depression the family had lost much of what they had and was then forced to move. The family relocated to Marysville, MT where his Father Lide worked in the gold mines. J was able to take his family to Marysville (now a ghost town) on several vacations to show them where he had lived, the goldmines and local community. The General Store open when he was a young child was still open for business with the same lady running it. She still had one of the largest candy selections ever seen, which his kids enjoyed as much as he had. When J was a young teen the family moved again to a small town near Spokane, Valleyford, WA where he finished school. J loved sports and played both baseball and basketball for his High School teams. He had a reputation for being an outstanding pitcher, and had been invited by the Cincinnati Reds to come to a tryout camp, but Uncle Sam had other plans for J. Upon graduating from High School in 1943, he was immediately drafted into the Navy. He served in WW2 in the South Pacific on the USS Wabash as a Radio Operator. He loved playing baseball, but loved his country more and he never forgot Morse Code. After his honorable discharge from the Navy, J returned to his family which now lived in Mae Valley where they farmed for several years. In December 1949 he married that "pretty gal" that had moved to Moses Lake, Sylvia Frances Taylor which he had met while she was working as a Waitress at the Turf Restaurant. They were then sealed in the Salt Lake Temple, and had been married for 62 years prior to her death in 2012. J and Frances raised their 5 children in Moses Lake, WA and were looked upon as wonderful parents and good providers. J worked at Holmes Brothers, U&I Sugar Company and International Titanium. J and Frances also owned several rental properties. After retiring, they traveled and worked together on Fran's favorite hobby of buying and selling antiques. Family and friends brought great joy to the Chapman Family. Family reunions and Holidays were spent doing lots of singing and enjoying an abundance of great food. J was preceded in death by his wife Sylvia Frances Chapman, sons Howard Loy, James Lee and J Lide Chapman, and grandsons Shane James and Jayson (Abraham) Chapman. He is survived by his daughter Zonda Chapman and son Mark (Michelle Davis) Chapman. In addition, he is survived by grandchildren, Tonya Nelson, Chad and Colin Chapman, David Chapman, Casey, Ashley, Kyle and Mackenzie Chapman, and great grandchildren Shai, Keaton, Michael, Jaida, Baylor, Wesley, Bentley, Sadie and Oliver. J Chapman was a highly respected member of this community for over 70 years and will be greatly missed.

J "Chappy" Lide Chapman J Lide Chapman passed away on August 18, 2020 in Battle Ground, WA from natural causes. He was 95 years old. Several family members were able to say their goodbyes just before his passing. He was very much loved by his... View Obituary & Service Information

The family of J "Chappy" Lide Chapman created this Life Tributes page to make it easy to share your memories.