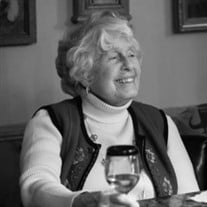 Isabelle Iona Endicott Cory Eytinge, passed away at the age of 97 on January 21, 2021, in Moses Lake, Washington. Isabelle was born on September 20, 1923 to Luella and Clifford Nordberg in South Haven, Minnesota. She graduated from Annandale High School. She played the drums in the band and in parades. She also had a beautiful voice and sang at weddings and funerals and events. Upon graduation from high school, Isabelle’s family moved to Bellingham, Washington and Isabelle started college at Seattle Pacific. There she met her first husband, George William Endicott (Bill). They married November 29, 1942, in San Diego. After only a few months, Bill was shipped off to fight in the Marine Tank Division. He was killed in Iwo Jima on February 25, 1945, tragically never meeting their only child, Mary Margaret. Now a war widow, Isabelle and Mary Margaret moved to Bellingham to be near her parents. She started work in the Circulation Library at Western Washington College (University). There she met her second husband, Francis M. Cory Jr., who was attending Western on the GI Bill. They married August 23, 1948 and moved to Lowell, Washington, the following year, when Fran got an elementary school teaching job. Isabelle and Fran had two children together, Jennie Ann and James McGuire. In addition to raising a family of 3, Fran and Isabelle spent their time hiking and fishing and exploring the north Cascades. They also were an incredible dancing couple. Isabelle completed her Bachelor’s degree at Seattle Pacific in 1964 and taught 4th grade for several years. She was a hair model on weekends and appeared on a Saturday afternoon TV talk show. On Mondays she would come to school with pink or lavender or green hair, to the delight of the children. She continued her education and added library credentials to her degree. She worked as a school librarian until she retired. Governor Dan Evans appointed her to the State Library Commission, and she was instrumental in the remodeling of the Everett Public Library. On July 13, 1975, Isabelle married Dr. Ernest J. Eytinge. They traveled the world together visiting every continent. Many of their adventures included scientific expedition cruises. Ern was the ship’s doctor and Isabelle was his assistant and ship trek leader. They were avid snow skiers and enjoyed boating in Puget Sound. Ern was also a skilled pilot, and they loved flying their plane “Mike”. Isabelle obtained her own pilots license and flew solo all over the western United States. She was very proud to be a card-carrying member of the “Ninety Nines”, an International Organization of Women Pilots. She was a WSU Cougar football fanatic and attended games well into her 90’s. She said she wanted to have the Cougar Fight Song played at her funeral. She was a member of the First Presbyterian Church in Everett and in Moses Lake. She also was a member of P.E.O. Chapter ER sisterhood. Isabelle is survived by her three children: Mary Margaret Endicott in Moses Lake, Jennie Larson (Larry) in Moses Lake, James Cory (Jackie) in Everett; and her three step children: Jonathon Eytinge (Mary) in Seattle, Margo Eytinge in Olympia, and Barbara Eytinge-Sletten (Richard) in Bloomington, MN. Ten Grandchildren: Todd Lewis , Katina Lewis-Eme, Ryan Larson, Kene Larson, Jamie Heinemeier Hansson, Jonathon Eytinge, Bret Eytinge, Alexis Eytinge, Lian Eytinge and Aimee Eytinge. Six Great grandchildren: Colt, Dash and Jack Heinemeier Hansson, and Grace, Harlow and Isla Eytinge. The family would like to thank the wonderful staff at the Monroe House and to Moses Lake Hospice for their care of Isabelle. Isabelle will be interred at the Tahoma National Cemetery.

Isabelle Iona Endicott Cory Eytinge, passed away at the age of 97 on January 21, 2021, in Moses Lake, Washington. Isabelle was born on September 20, 1923 to Luella and Clifford Nordberg in South Haven, Minnesota. She graduated from Annandale... View Obituary & Service Information

The family of Isabelle Iona Eytinge created this Life Tributes page to make it easy to share your memories.

Isabelle Iona Endicott Cory Eytinge, passed away at the age of...