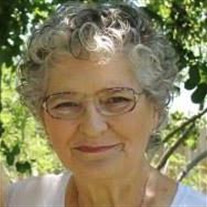 Iris E. Mill, long time Moses Lake resident passed away on Monday, march 12, 2018 at her home surrounded by loving family. Graveside services will be held at 10 a.m., Monday, March 19th at Guarding Angels Cemetery, 2595 Road L NE followed by a memorial at 11 a.m. at The Church of Jesus Christ Latter-day Saints, Rose Street Chapel, 1036 W. Rose Avenue, Moses Lake. Iris Eileen Mill July 2, 1928 to March 12, 2018 Iris Eileen Mill passed away at 89 years of age at her home. She was born in Wauconda, WA to Jennie and Howard Hill. Shortly after she moved to Seattle, where she grew up. She attended Queen Ann High School until one day she met a handsome sailor at the local bowling alley. It was love at first sight and days later she and Stanley Mill married. She left school with only 1 month left before graduation and moved to Southern California to live with his family while Stanley was deployed.Upon his return, they moved to Curlew, WA. Her parents had moved back to this area and owned the local saw mill. Stanley went to work for Iris’s dad and they began their own family. Stanley found employment with the Air Force Civil Service and this began their journey of many moves and acquiring a multitude of friends. While living in Great Falls, Montana, she met a family who would become lifelong friends and would introduce her to the LDS Church. She was baptized, along with her three children. As Stanley neared retirement, they purchased land and a home on Johnson Point in Olympia, WA. This is the place that they finally began to settle into their lives. Iris began a work of service helping out volunteering at the hospital and local schools. She loved long walks by the water and working in her massive garden. She loved taking care of others and especially cooking for them. When the rainy weather got to be too much for them in 1997, they relocated to Moses Lake, WA. They had good friends who lived in the area and convinced them to come to the sunny part of the state. After Stanley’s passing in 2010, after 64 years of marriage, Iris began spending more time with that good friend who had encouraged her to move to Moses Lake. Arnold had also recently lost his wife. At the young age of 87, Iris wed Arnold Nelson and began a new chapter in her life story. While in Moses Lake, Iris joined New Comers Club and those people became her dear friends for the rest of her lifetime. Iris made friends wherever she went. She was a strong woman who loved life and will be greatly missed by everyone who was fortunate to have been a part of her life journey. Iris is survived by her husband, Arnold Nelson, daughter, Patricia (Keith) Christensen; daughter Terry (Michael) Walsh; and son Jesse (Jeani) Mill. Granddaughters, Jenny Espinoza; Andrea Treddenbarger; Rachelle Hillery; Jessica Harper; Samantha Mill; and Kodie Ginder-Mill. Grandsons, Ryan Christensen; Chad Tribble; Scott Tribble; and Kolton Ginder-Mill.The proud great-grandmother to 11 great-grandchildren. Iris was preceded in death by her husband, Stanley Mill; sister Stella Fay Hill; brother, Gerald Hill.

The family of Iris Mill created this Life Tributes page to make it easy to share your memories.