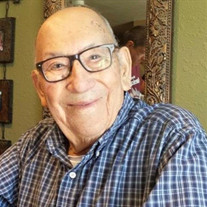 Inocencio Ortiz, Jr. On September 17, 2018, Inocencio Ortiz, Jr., age 90, went into the loving arms of the Lord surrounded by his wife, seven children, and twelve of his grandchildren. Chencho, as he was called, was born on April 19, 1928 to Inocencio Ortiz, Sr. and Rafaela Solis in La Grulla, Texas. He was the only son of seven children but was raised in the same household as cousins whom he considered siblings. He married Idolina Cristela Duarte on January 2, 1955 in La Joya, Texas. They moved to Warden Washington in 1963 where they raised their seven children: Rafaela Ortiz (Doug Mac Donald), Ino (Joetta), Joel (Glenda), Irasema Elizalde (Joe), Jorge Luis (Debbie), Eliseo (Joylynn), and Graciela Melby (Doug). A farmer all his life, he first farmed in the Rio Grande Valley of Texas before moving to Warden where he farmed for Harry Yamamoto, Columbia Producers, and Gil and Henry Farms. Chencho loved to work the dirt and grow amazing crops for his bosses and huge vegetable gardens for his family. He had a strong work ethic that was equaled only by his commitment to his family and his love for education. He insisted his children get an education and was never prouder than when he was attending a graduation for one of his kids or grandkids. Chencho also loved parties, especially when all his children and grandkids were present. He had a great sense of humor and loved to laugh and joke. His favorite activities were working the fields, fishing, reading, tending to the farm animals, visiting with his buddies at the café, and tinkering with his tools. He remained a fun-loving extrovert throughout his life until Alzheimer’s took away his memories and his voice. Surviving him are his wife and children and his grandchildren Stephen (Jackie) and Sarah Mac Donald, Monica Isensee (Vince), Heather Klitzke (Robert), Jennifer Ortiz, Joseph (Brandy), Amanda, and Zachary Elizalde, Nathaniel, Jared, and Benjamin Ortiz, Margarita, Jessica, Luis, Esteban, Carlos, and Josline Dominguez, and Jaidyn and Dylan Melby.Great grandchildren include Lucas Mac Donald, Cody Isensee, McKenna Klitzke, Ava Jo and Nash Elizalde, Wyatt Dutcher, and Derek Martinez. Chencho is also survived by his sisters Maria Rosa Garcia, Rafaela Caro, Odelia Vela, Alicia Saenz, brother Lorenzo Ortiz, sisters-in-law Janie Dicken (Steve), Maria Luisa Perales (Victor), Luisa Duarte, Minerva Duarte, brother-in-law Henry Duarte (Rose), and numerous cousins, nieces and nephews. He is predeceased by his parents, daughter Graciela Ortiz, sisters Juanita Flores, Hortencia Rodriguez, Felipa Garza, Eva Garza, and Anita Cantu, brothers Onesimo, Raul, and Alberto Ortiz, and brothers-in-law John Duarte and Demetrio Duarte. Visitation will be held at Kayser’s Chapel in Moses Lake from 5:30 to 7:00 p.m. on Thursday, September 20, 2018. Services will be at Queen of All Saints in Warden on Monday, September 24 with viewing at 9:00 a.m., Rosary at 10:00 a.m. and Mass at 10:30 a.m. Interment will follow at Sunset Memorial Gardens.

Inocencio Ortiz, Jr. On September 17, 2018, Inocencio Ortiz, Jr., age 90, went into the loving arms of the Lord surrounded by his wife, seven children, and twelve of his grandchildren. Chencho, as he was called, was born on April 19, 1928 to... View Obituary & Service Information

The family of Inocencio Ortiz Jr created this Life Tributes page to make it easy to share your memories.