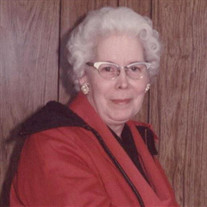 Inez Gertrude (Van Diest) Schemper, 101, a resident of Moses Lake passed away January 7, 2019 at Samaritan Hospital. Inez was born on March 26, 1917 in Palco, Kansas to Minnie (Kappers) and William Van Diest. Inez was married to Harold Charles Schemper on September 20, 1938 In Yakima, WA. They had three children Larry, Karen and Roger. The family had several adventures moving from Washington to Colorado, Oregon and then finally retiring in Washington. Inez and Harold assisted in the building of the Presbyterian Church in Terrace Heights, WA. Inez a deacon of the church gave many tireless hours to assisting the congregation. Over the years Inez worked for many retail stores, but most notably she was an excellent seamstress and tailor. Inez spent most of her spare time sewing clothing for her family and others, and spent many hours doing craft projects. Her family has many wonderful homemade Christmas tree ornaments to pass on to future generations. Inez moved to Moses Lake after Harold passed to be near family. She joined the Moses Lake Free Methodist church and spent many hours doing activities with the Willing Workers Widows Group. When she could no longer live on her own in 2003 she moved to Hearthstone Inn where she enjoyed the residents and daily activities. Inez was preceded in death by her husband Harold, her parents and two brothers Clarence and Henry, and a son-in-law Phil. She is survived by her children Larry (Sue) Schemper of Apache Junction, AZ, Karen Parachinni of Keenesburg, Colorado and Roger (Rose) Schemper of Moses Lake. Six grandchildren Lisa (Donny) Kaempfer, Lynn (Louie)Sondoval, Brenda (Craig) Fritzler, Melissa (Darren) Tank, Danielle Cruz, and Jeremy Schemper, twelve great grandchildren and two great great grandchildren. Funeral Services will be held at 2 p.m., Friday, January 11, 2019 at Kayser’s Chapel of Memories. Burial will be in Terrace Heights Memorial Park in Yakima. Arrangements are in care of Kayser’s Chapel of Memories. Please sign the online guestbook or leave a note for the family at www.kayserschapel.com. Arrangements in care of Kayser’s Chapel.

The family of Inez G Schemper created this Life Tributes page to make it easy to share your memories.