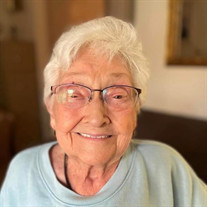 Imogene Wilma Greif, 87, went home to her Heavenly Fathers House on November 30th, 2021. Surrounded by her children, Imogene passed peacefully at Samaritan Hospital. Imogene, “Genie” was born on July 10th,1934. She was the only child born to Louise Schober Jacks and William A. Jacks. Born in Lewiston, Idaho, she was one of the first C-Section babies born in the area. She graduated from Cottonwood High School and attended Our Lady of Consolation School of Nursing in Cottonwood Idaho where she earned her LPN nursing license. At a community dance, Imogene met James Greif while he was on leave from the United States Air Force. They were married the next year on December 29th,1954 in Cottonwood Idaho. She soon joined her husband Jim in Kaufbeuren Germany where they spent the next two years and welcomed their first child Joseph. She loved telling stories of their adventures in Germany, traveling through the Bavarian countryside, touring castles and visiting many European cities. She loved her time in Germany and the friendships she made that continued throughout her life. When she returned to the states she had five more children. Busy at home, she became a wonderful cook, and baking was her specialty. Her rolls and pies were known by her family and friends as “The Best”! In 1974 Jim’s work transferred the family to Moses Lake Washington. Difficult as it was to move, Imogene with her friendly personality, quickly made many new friends. She worked at a nursing home in Moses Lake and later provided home nursing care. She was active in the church, and attended many women's bible studies. Everyone who knew Imogene knew that Jesus was the most important thing in her life. She would often remind us that a life without Jesus is wasted. Following is her life verse that she lived by. Proverbs 3:5-6 “Trust in the Lord with all your heart, and lean not unto your own understanding, in all your ways acknowledge Him and He will direct your path”. She is survived by her children: Joseph (Cynthia) Greif Seattle WA, Michael A. Greif Seattle, WA, Catherine (Sam) Grant of Moses Lake, WA, Jill (Patrick) Boruff of Soap Lake, WA, Lynette (Marc) Zimmer of Moses Lake, WA. She has nine grandchildren: Ginny Grant, Skyyler Grant, Sophia Greif, Johanna Greif, Daniel Zimmer, James Zimmer, Matthew Zimmer, Rachel Boruff and Maxwell Boruff. Two great grandchildren: Stella Pedroni and Sam Pedroni. She is preceded in death by her daughter Mary Louise (Mitzi) Greif and her husband James Michael Greif. We would like to thank all those who graciously helped our mom at the Monroe House and for the wonderful care given to her during the last two months at Peaceful Meadows Adult family home. Imogene will be interred on Saturday, December 4, 2021 at Cottonwood Cemetery in Idaho. A memorial service will be held at 1pm, December 11th, 2021 at Kayser’s Chapel, 831 S Pioneer Way, Moses Lake, WA.

Imogene Wilma Greif, 87, went home to her Heavenly Fathers House on November 30th, 2021. Surrounded by her children, Imogene passed peacefully at Samaritan Hospital. Imogene, &#8220;Genie&#8221; was born on July 10th,1934. She was the only... View Obituary & Service Information

The family of Imogene Wilma Greif created this Life Tributes page to make it easy to share your memories.