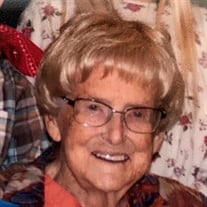 Ila Bock Wiser passed away on 8/22/2020, age 97, at Monroe House Retirement Center in Moses Lake, WA, where she had been a resident for the last 4 1/2 years. Ila was born at the family home to Fred and Clara Schoop Bock on December 29, 1922 in Appleton City, Missouri and was 1 of 9 children. She attended Potts school house and then Appleton City High School, graduating in 1940. In the early 1940’s she attended Huff Business College in Kansas City, then worked at Lyndey Air for the Next 10 months. During the war, Ila worked in the office for North American Aviation and that is where she met her future husband, Bud Wiser. Bud and Ila were Married October 2, 1943, in Kansas City, Kansas. They eventually moved back to Appleton City, where they farmed and their children were born, Madonna Lee in 1949 and Ken Kelly in 1951. The family then moved out west, settling in Moses Lake, WA in 1956. They started a milk bottling company, fertilizer plant and farmed in the Columbia Basin. Ila was a member of the First Presbyterian Church since 1956, loved golf, cooking and taking care of her family. She is survived by 3 of her siblings JD Bock, Denver Colo, Allyne Schultze, Butler Missouri and Jayne Mcnabb, Butler Missouri. Her children Madonna (Paul) Engle of Marietta, Georgia, Ken (Susie) Wiser of Royal City, WA. Her Grandchildren Tracy (Craig) Brown of Wenatchee, Stacy (Kyle) Steinburg of East Wenatchee, WA and Travis (Amanda) Wiser of Ephrata, WA Grandchildren, Conrad, Kody and Kaylee Brown, Tyler and Kaden Steinburg, Rebecca, Roan and Canton Wiser.Ila was preceded in death by 4 siblings, her parents and Rebecca Wiser (daughter-in-Law) Ila was full of grace, love and kindness. The family has decided to not have a public memorial due to current events. In lieu of flowers, donations can be made to the First Presbyterian Church, Moses Lake or Assured Hospice, Moses Lake in Ila’s name. The family would like to extend their thankfulness to Hospice, the Monroe House and its caregivers for their devotion to Ila in her last days.

Ila Bock Wiser passed away on 8/22/2020, age 97, at Monroe House Retirement Center in Moses Lake, WA, where she had been a resident for the last 4 1/2 years. Ila was born at the family home to Fred and Clara Schoop Bock on December 29, 1922... View Obituary & Service Information

The family of Ila Bock Wiser created this Life Tributes page to make it easy to share your memories.