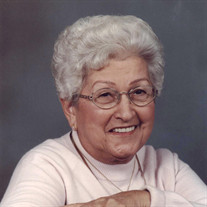 Ida Esther (Goehner) Radach, 92, of Moses Lake, formerly of Wenatchee, died Sunday, October 23, 2016, at Lakeview Home Care, surrounded by her family. Ida was born on January 14, 1924, to Frederick and Christina (Schaber) Goehner, the 8th of 10 children, in Kulm, North Dakota. In 1937, her family moved to Dryden, Washington and she graduated from Dryden High School in 1941. On June 4, 1943, Ida married Leo Richard Daniel Radach in Wenatchee. They made their home in Dryden, where they raised their two children, Jeannette and Marland. Ida and Leo owned and operated an orchard for 38 years in Dryden. Ida also worked at Liberty Orchards, Cashmere Bakery, Blue Star and many years at Cashmere Valley Bank. After Leo retired in 1983 they moved to Wenatchee. Ida and Leo were fortunate to travel to many areas in the United States, Hawaii, and in Europe. For 12 years they spent their winters in Desert Hot Springs, California. Ida was a member of the Dryden Community Church where she was active in many areas of the church. Ida is survived by her daughter, Jeannette Winterroth of Vancouver, Washington; son and daughter-in-law, Marland and Linda Radach of Moses Lake; granddaughter, Nichole (Chris) Franklin and two great grandchildren, Rylan and Haddie of Moses Lake; grandson, Daniel (Macey) Radach of Moses Lake; sister, Edna Weedman of Puyallup; sister-in-law, Alma Radach of Wenatchee. She was preceded in death by her husband, Leo; her parents, 6 brothers, 2 sisters, and son-in-law, Cal Winterroth. A memorial service will be held on Saturday, November 5, 2016, at 11 am at the Dryden Community Church, 6801 Dryden Ave., Dryden, Washington.

The family of Ida Radach created this Life Tributes page to make it easy to share your memories.